Presented by Intel It’s a tough time for a lot of people around the world right now, and the creators of Thunder Rally hope...

It’s a tough time for a lot of people around the world right now, and the creators of Thunder Rally hope that their multiplayer game can provide some relief to friends and families stuck at home.

Out now on PC via Steam Early Access, Thunder Rally is a free-for-all vehicular brawl in which up to eight players try to obliterate each other using cars and ridiculous power-ups. It’s been a labor of love for independent studio Typical Entertainment –  the developers have been making Thunder Rally in their spare nights and weekends for over two years.

The team is a mix of current and former employees from The Void, the maker of location-based virtual reality games like Avengers: Damage Control and Star Wars: Secrets of the Empire. But while they enjoy being at The Void, Typical Entertainment’s founders were itching to make a game of their own, one inspired by their work in game jams and frequent sessions of Super Smash Bros.

“We were all playing Super Smash Bros. — it was before the newest one came out — and it wasn’t up to eight players. We always had game nights. … The fifth guy was always left out and we were like, ‘You know what we should do? We should make a game that we can all play all at once,’” said Typical co-founder Abel Perry.

The developers took inspiration from other games as well. Co-founder Eric Davis drew on his time playing custom demolition derby-style multiplayer maps in Halo, where players would ram each other off an arena while driving Warthogs, and those who died could still compete by tossing grenades from the sidelines. Typical wanted Thunder Rally to have that same kind of non-stop experience. 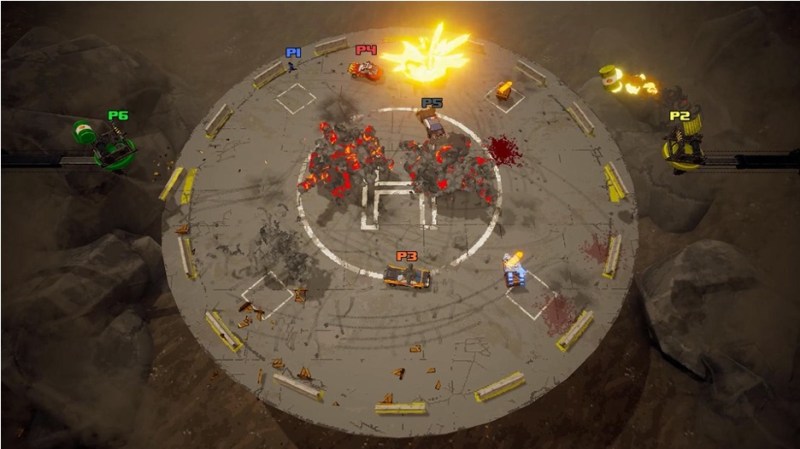 “Everyone has a chance to keep playing with basically no downtime,” said Davis.

Fighting til the bitter end

While each round of Thunder Rally starts off as a simple demo derby, it doesn’t stay that way for long. In addition to colliding with one other, you can drive over crates to pick up power-ups that give you new offensive or defensive options. Some are just weapons like landmines and homing missiles. But others, like the rewind time ability (resets your car back to a previous position) and jets that allow your car to briefly fly, can drastically alter your strategies.

So-called “super” power-ups, such as a black hole and a Transformers-like mech mode, can turn the tide of battle in your favor. The longer a round lasts, the more frequent these super power-ups will appear — it’s Typical’s way of keeping matches short and snappy. And if that wasn’t enough, dead players return as catapults that spawn on the edges of the map, and they can launch explosive barrels at anyone who’s still alive.

Some of the levels also have environmental hazards that you must avoid on top of dodging your fellow players (or CPU-controlled cars if you don’t have enough people). With that many variables, a match can quickly devolve into pure pandemonium. 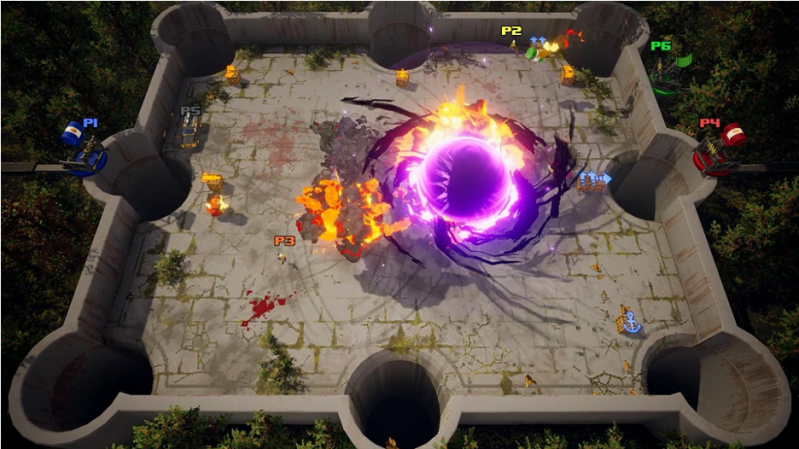 “We want Thunder Rally to be pick-up-and-play, but we also want it to have this bit of difficulty so that if you’re really good, you can just smash everyone. But it still has enough randomness to give low-skill players a chance to win,” said Perry.

Balancing day jobs with indie development hasn’t been easy for the team. But Typical’s partnership with Intel means it doesn’t have to shoulder that burden alone. The developers have been using Intel’s quality assurance services, and the company also helped them make sure that Thunder Rally runs well on integrated GPUs like the UHD Graphics 630 chip.

That frees up Typical to focus on Thunder Rally’s Early Access period. With 40 levels and several car designs, the game already has a lot of content. But the team still has big updates in the works, all of which will expand Thunder Rally way beyond their original aspirations.

“Thunder Rally was supposed to help us learn the ropes of the process and just get something out there as quickly as possible. But it gained a bit more traction than we thought it would,” explained Davis. “And so we decided, ‘Okay, let’s go all the way with this. Let’s try to get this out to as many consoles as we can. Let’s try to get online multiplayer.’”

Getting online multiplayer up and running is one of the studio’s major priorities (currently, you can only play with friends through Steam’s Remote Play Together feature). Typical is also using Early Access to collect feedback from the Thunder Rally community and see what changes or improvements need to be made.

“Even though there is just one mode, there are a lot of levels and power-ups and we continue to keep adding more so that the game feels fresh and you can play it for a long time,” said Davis. “We’ve been playing it for two years, and we still have a blast every time we play.”

Sponsored articles are content produced by a company that is either paying for the post or has a business relationship with VentureBeat, and they’re always clearly marked. Content produced by our editorial team is never influenced by advertisers or sponsors in any way. For more information, contact sales@venturebeat.com.