Tom Hall is a versatile game designer with more than three decades of experience. He has worked on hardcore games such as Doom, Duke...

Tom Hall is a versatile game designer with more than three decades of experience. He has worked on hardcore games such as Doom, Duke Nukem, Rise of the Triad, Wolfenstein 3-D, and Anachronox. But he has also shown interest in the broader craft of making games for other platforms, and that’s why he worked on the Diner Dash mobile games at PlayFirst and more recently at Glu Mobile.

Now he is shifting his focus to virtual reality games, as he announced this week he is joining Resolution Games, the Stockholm, Sweden-based company headed by Candy Crush Saga co-creator Tommy Palm. Hall joined as a senior creative director, and he is happy to work on games that are de-stressors, or those that take the stress out of life.

Hall started out his career at id Software as one of four cofounders who made legendary first-person shooter games for the PC. He left to join Ion Storm as a cofounder and rode that company through its rise and fall. His colleague from the id days, John Carmack, became the chief technology officer at Oculus and pioneered mobile VR before moving to a consulting role last fall.

Hall’s endorsement of VR comes at an interesting time as VR has struggled to find its footing. Initial sales are far below what advocates hoped around 2014, but the passion for VR abides and headsets such as the Oculus Quest are selling out during the pandemic. I talked with Hall about the arc of his career and why he was drawn to VR and augmented reality games.

Resolution Games has 66 people and it has published VR games including Bait!, Acron: Attack of the Squirrels!, Angry Birds VR: Isle of Pigs, and Wonderglade. It is working on Cook-Out: A Sandwich Tale and Blaston.

Here’s an edited transcript of our interview. 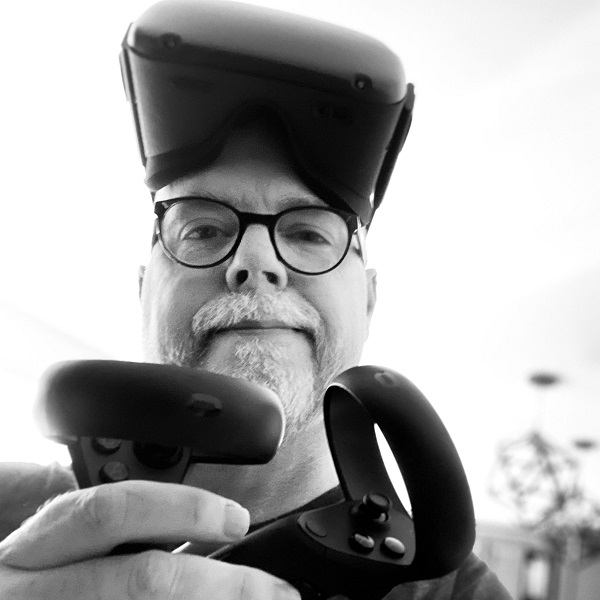 Above: Tom Hall is a co-creator of Doom. He joined Resolution Games as a senior creative director.

GamesBeat: Tell me about what’s been going on. You left Glu not long ago.

Tom Hall: Yeah. It was a wonderful experience over seven years. The team felt like a family. Our studio was really special. I’ve been following VR for a very long time. With the team I made a VR game in 1992, Wolfenstein VR. It was a nice peek at the future.

GamesBeat: Did that ever make it out into the market?

Hall: It was an arcade machine. You lowered a helmet over yourself and controlled it with a joystick. The field of view was a little bit wider. It was an interesting project to try, very early on. I’ve been interested in VR and AR for a long time. I have a ton of headsets, a ton of games. Back at Glu we released VR titles and things with AR features. It’s a fascinating medium to explore as a game designer.

That’s one of the reasons I was thinking–there were the first early starts. Gee-whiz, this is a shiny new toy. Now we’re in companies that are serious about taking VR and AR into the future, thinking about what game experiences could be besides just playing basketball or things like that. Something a little deeper. It’s an interesting time to be in the space. AR is going to infuse our lives. VR is going to grow into a more mature medium. We used to ask if a game could make you cry, if the sense of personal reality could be so strong. With the right experience you’re going to cry your eyes out.

This is a great time to be making VR content at a premier VR and AR developer. I’m really excited about it.

GamesBeat: Why have you been so open to new platforms throughout your career? You were in the PC world. You were in mobile. You’re moving to VR here. Other people tend to stick with the things they started around.

Hall: At id we had a thing where we made Gamer’s Edge games and id games. We tried all sorts of games. That was exciting. As we sort of co-invented the first-person shooter, it was like–we made five of those, refining the process of it, from Hovertank on. To me, who gets the honor of defining and refining the basics of what FPS controls are, how you move in 3D, how you take actions–that was a heavy honor to have.

Now we’re past the initial phase of that in VR, how you move and so on. But we’re still finding out what actions you can take in the environment, what actors and items in the space can mean. The emotions and experiences that we can draw out going forward need to grow beyond fear and vertigo. We want to explore how meaningful an experience you can have and get beyond just shooters that are scary. What experience can be novel given this first-person, very intimate experience?

Above: Resolution Games’ Acron: Attack of the Squirrels.

GamesBeat: What titles did you work on at Glu?

GamesBeat: In that case, where people would say “these aren’t real games, the real games are Quake and Doom,” what was your answer to that?

Hall: Free-to-play games are fun, bite-sized de-stressors. You can enjoy a game loop over a period of days. In a way, it fits the VR session experience. People will play a session of VR and then pick it up the next day. That’s a natural move onward. I don’t think that it’s valid to say that these games are better than these other games. I love all kinds of games. Making Wolfenstein and Doom was an amazing experience, and making free-to-play games that millions of people play is an amazing experience too. I just want to put fun experiences that have strong character and personality in front of people and I hope that they enjoy them.

GamesBeat: How many game companies have you worked at now?

Hall: I’ve been in the industry 33 years, and I’ve been making games for 40. I don’t have that count on me, but it was id, and then Apogee and 3D Realms. Ion Storm. MonkeyStone Games. Then I went to work for Midway, and then KingsIsle, Loot Drop. Then PlayFirst/Glu Play, which is now part of Glu Mobile, and now here.