Take the latest VB Survey to share how your company is implementing AI today. Virtual beings are artificial people powered by AI, and startups...

Virtual beings are artificial people powered by AI, and startups making them have raised more than $300 million to date. That’s one of the facts being highlighted at the Virtual Beings Summit on Wednesday.

The digital-only event will be held on Zoom from 10:30 a.m. Pacific to 3:30 p.m. on Wednesday. It’s the forum for talks on how to create virtual beings and what they’ll be useful for. The speakers will appear only as virtual beings in the conference, specifically as avatars from Fortnite or Animal Crossing: New Horizons.

Virtual beings are a kind of precursor for the Metaverse, the universe of virtual worlds that are all interconnected, like in novels such as Snow Crash and Ready Player One. First you make virtual beings, then you give them a virtual place to inhabit.

The virtual-beings-only event is the brainchild of Edward Saatchi, CEO of Fable Studio, the maker of the virtual reality experience Wolves in the Walls. This is the third such event, and I’ll be speaking on a panel on the 2D Metaverse, hosted by Rogue venture capitalist Alice Lloyd George. I’ll be appearing as an Animal Crossing character via my daughter’s account.

As far as I know, no one has been doing this kind of avatar-based conference this way. Gary Whitta has recently made a hit from Animal Talking, a talk show set inside Animal Crossing. But Saatchi is welcoming avatars from multiple worlds.

“I’m super proud,” said Saatchi, in an interview with GamesBeat. “I’m trying to approach the event as a work of art itself, in that it’s almost like an anthology of short scenes from five years in the future.”

In an interview, Saatchi said that one of the things that will be described at the event is the Virtual Beings Venture Capital Alliance, which brings together investors who are enthusiastic about the space. Saatchi believes that virtual beings will be at the heart of the next great computing operating system. There are virtual companions, like the character in the movie Her, and companies that will try to bring back dead people as virtual beings, such as bringing back movie star James Dean as a virtual actor. The summit will probably be full of people who are welcoming this future of virtual beings, rather than fearing it.

“Elon Musk talks about the terror of AI. But there’s also this really beautiful thing where emotionally we can be moved by it,” Saatchi said. “I’m very proud of [Wolves in the Walls protagonist] Lucy, and I get real emotional seeing the connection between a person talking to Lucy. I think what AI Foundation (with Digital Deepak Chopra) is doing is so ridiculously cool. We can take people on an emotional journey, make them cry, make them laugh, and give them a provocative glimpse of five years in the future.”

“Lil Miquela is the best example I can think of as a persistent character,” Saatchi said.

He said Replika, which gives people a virtual companion to communicate with via text message, is an “amazing example of a two-way relationship where there’s memory built into it.” 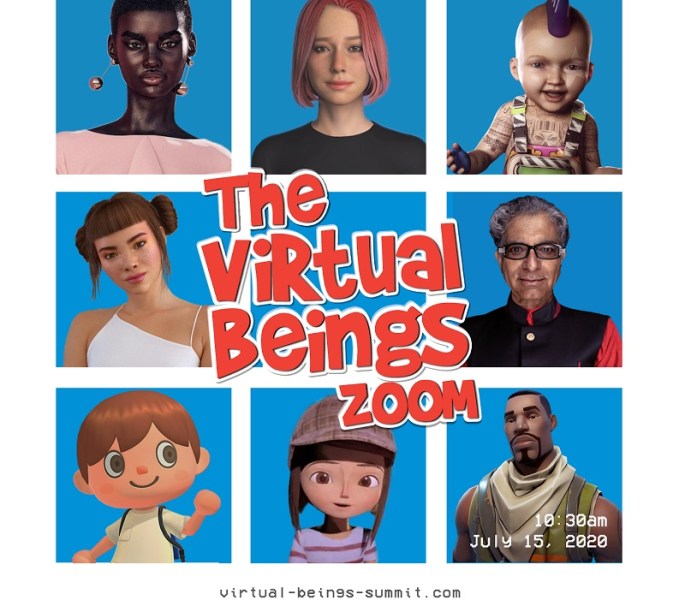 Above: The Virtual Beings Zoom

So far, more than 300 people have signed up to attend the event, Saatchi said. They include investors, founders, academics, and representatives from Google, Facebook, and Amazon. Visit Virtual-Beings-Summit.com for a press ticket, and VentureBeat readers can use the code Vbloyalventurebeat for a 25% discount.

I’ll be discussing the two-dimensional Metaverse inside Animal Crossing alongside Alice Lloyd George, founder of Flux; Timoni West, director of XR Tools at Unity; and Aaron Lemke, chief creative officer of Wave XR. I think of Animal Crossing as a kind of accidental Metaverse, one that nobody expected to emerge with a huge audience in contrast with all of the metaverses that others are trying to create intentionally.

“I think that the 2D Metaverse is probably the biggest trend that is intersecting with virtual beings, if you think of the Travis Scott on Fortnite or Animal Talking on Animal Crossing,” Saatchi said. “It’s unexpected, like Gregarious Simulation Systems (from Ready Player One). They all just built video games and didn’t realize they were building social networks. I don’t think anyone felt they were building the next social network. When you have that next Facebook, in a virtual world, then that opens up the possibility of being friends with virtual beings, because we’re all virtual and the playing field is level at that point.”

In this virtual beings space, I’ve written about companies like Genies, a maker of cartoonlike digital avatars for celebrities. It has raised $40 million.

This industry has grown so fast, it’s hard to believe this is the third event. The first one was held just a year ago.

“Nobody would have been ready to do these digital avatars a year ago, so it’s moving very rapidly,” Saatchi said. “I think we have some real case studies now about true emotional connection with virtual beings.”