Mozilla sunsets Notes and Send to ‘tighten’ its product focus

Mozilla is sunsetting two services as the Firefox browser maker seeks to “tighten and refine” its product lineup and focus on core areas of...

Mozilla is sunsetting two services as the Firefox browser maker seeks to “tighten and refine” its product lineup and focus on core areas of its business. The announcement comes less than a month after Mozilla announced a major restructuring of its corporate division, leading to 250 layoffs — a quarter of its workforce.

The first product casualty has in fact already happened, though this was initially intended as a temporary measure to combat nefarious behavior.

Mozilla debuted a pilot file-transfer service called Firefox Send back in 2017, before rolling it out as an official Mozilla product on desktop and mobile last year. Firefox Send, which adopted end-to-end encryption to allow users to securely send files to anyone, became embroiled in controversy this year when it emerged that the service was being used to spread malware. This led Mozilla to suspend the service while it deployed improvements to thwart bad actors.

As of this morning, the Firefox Send portal still sported a “temporarily unavailable” message, but in a blog post Mozilla confirmed that it won’t be bringing the service back. “As we weighed the cost of our overall portfolio and strategic focus, we made the decision not to relaunch the service,” the company wrote. 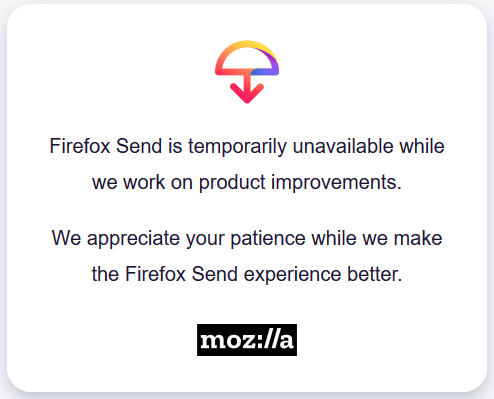 In 2018, Mozilla debuted a new tool called Firefox Notes, available for the Firefox browser via an extension and a standalone Android app, which allowed users to synchronize notes across platforms. Mozilla confirmed today that the Notes Android app and syncing service will be pulled in early November, while the browser add-on will remain available for existing installations — this won’t be supported by Mozilla, though, and it won’t be available for fresh installs.

Both Send and Notes emerged from Test Pilot, an experimental program that Mozilla launched back in 2016 to try out new ideas and features. The company killed its Test Pilot program in January 2019, before resurrecting the initiative 9 months later with a renewed focus on privacy tools —  the first major product to emerge was a new subscription VPN service that exited beta in July.

Elsewhere, in 2018 Mozilla launched Firefox Monitor, which uses Have I Been Pwned? to inform people of data breaches, and a browser extension that enables users to isolate their web browsing activity from Facebook. Earlier today, Mozilla also launched a new add-on for both Firefox and Chrome that seeks to crowdsource research into YouTube’s opaque recommendations algorithm.

It’s clear that Mozilla is pushing hard to find its niche in an industry dominated by the likes of Google, Facebook, and other tech behemoths; building a sustainable, profitable business is difficult in that landscape. And that is why positioning itself as a pro-privacy, anti-big-tech alternative could be its savior in the long run — which means that some products are ultimately thrown in the trash along the way.