Along with the Xbox Series X, Microsoft sent GamesBeat the new Xbox controller. This gamepad comes with the next-gen hardware, but you can, of...

Along with the Xbox Series X, Microsoft sent GamesBeat the new Xbox controller. This gamepad comes with the next-gen hardware, but you can, of course, also purchase it separately for $60. And you are probably thinking that this controller looks a lot like the last one, and you’re right. Xbox’s designers kept the same general look, but that doesn’t mean it kept the same feel. Microsoft made a number of subtle changes that all result in making this the best Xbox controller (except for the Elite).

Most people probably won’t notice any major differences when picking up the new Xbox controller, but I did. And you’d definitely feel some of the changes if you pick up one right after the other. And to me, this is the right decision. The Xbox gamepad is already great, but Microsoft decided to find ways to make it better. And most of those changes relate to making the same general shape fit better into a wider variety of hands.

Xbox designer Ryan Whitaker said in March that Microsoft focused on the average 8-year-old’s hands. It found that they could improve ergonomics for millions of people without sacrificing comfort for other hand sizes. And I think it succeeded.

The Xbox Series X controller does have some obvious visual differences compared to its predecessors. It also has some slightly less noticeable physical changes. But then it also has hidden revisions that you’ll only discover once you pick it up — like its weight distribution. This gamepad has a lot more mass in its grips than the Xbox One controller. And this is by far my favorite change so far.

Like the other edits to the design, this is also subtle. But it also contributes to the controller feeling better to hold. Combined with the new textured-plastic grip, this weight helps to apply the controller firmly into your fingers and knuckles.

It makes the gamepad feel overall more like the Elite or Elite Series 2. It doesn’t have the same total heft, but it seems like it does because it is using its mass more effectively.

This is a great D-pad. I get why some worry about it. You want the cross pattern that we’re all familiar with and trust. But this design works just as well as the Nintendo-style cross, and then it has a number of significant advantages.

The most important thing for me in a D-pad is avoiding false positives. If I rock the D-pad up slightly while pressing right, I don’t want my character to start moving up. I was happy that the controller has a very prominent line of demarcation between its directions. You have to press diagonal with a purpose to actually activate the diagonal button. 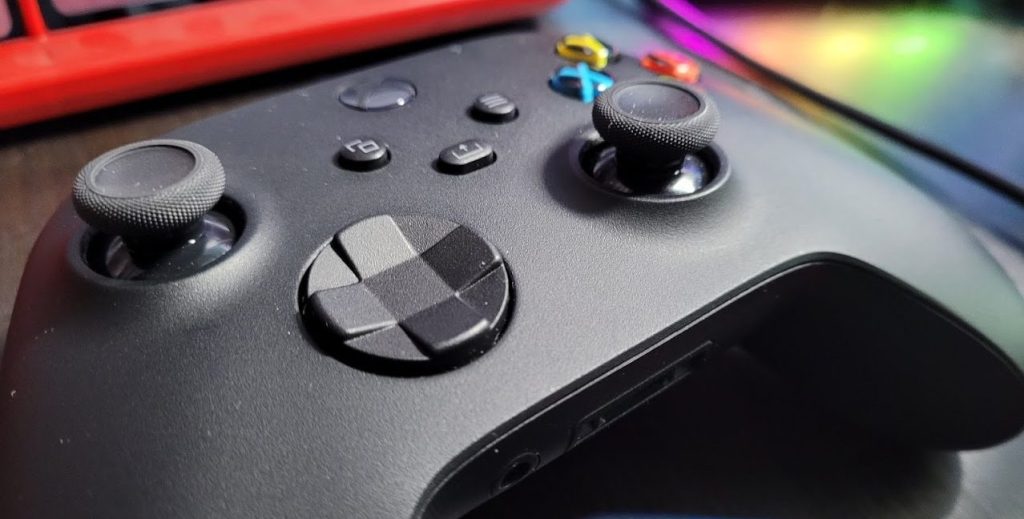 Above: The Xbox Series X’s D-pad.

But that doesn’t mean this direction input requires extra effort to control. It has a concave shape that simplifies quick direction changes. This is a huge improvement for me, because I’ve found recently that I could switch inputs faster with an analog stick, and this changes that.

I played Dead Cells using this controller, and it worked better than anything else I’ve used for that game.

Microsoft also made a slight revision to the analog sticks, at least as far as I can tell. They feel tighter, which is nice. But more important, they also feel more consistent. With the Xbox One controller, it feels like you need to apply a different amount of pressure to begin moving the stick versus keeping it moving. This makes it a challenge to move the stick to a 50% position between neutral and the edge of its well.

But with the Xbox Series X controller, the motion is very consistent, and I’m finding it easier to make those more nuanced control adjustments.

Some of the more subtle yet noticeable changes are to the shoulder buttons. Microsoft rounded down the edges of both the bumpers and the triggers. This makes them easier for me to press, but I can also see how kids would have an easier time with these now. I find that my index finger now rests on these buttons more naturally than before.

The designers even added textured bumps into the nook where you’re supposed to rest your finger tip. This acts almost like the notch on the J-key on your keyboard so you know where your controller’s “home row” is.

Finally, the new controller also has a new button: Share. This is oblong button right in the middle of the gamepad that enables you to quickly capture screenshots and clips while playing.

The Xbox One console has recording and screenshot features, but it’s not built into the controller. This makes it simpler to access those capabilities. I’ve already used it a lot, and I’m glad that Microsoft included it. Also, if you don’t ever use the Share button, you can map some other function to it so that it doesn’t go to waste.