Zoom announced the next step in its evolution as a video communications platform today, as the San Jose-based company unveiled a new integrated online...

Zoom announced the next step in its evolution as a video communications platform today, as the San Jose-based company unveiled a new integrated online marketplace for online events. The company made the big reveal at its annual Zoomtopia event this morning.

It has been a whirlwind year for Zoom, the historically enterprise-focused video chat tool that became emblematic of the world’s rapid transition to the digital realm due to the COVID-19 crisis. Zoom’s shares have risen by more than 700% since the start of the year, with its market cap now sitting at $140 billion — up from $17 billion in January — and its revenues and user numbers hitting hockey stick trajectories as companies were forced to embrace virtual meetings. In reality, though, Zoom became the default communications conduit for virtual family catch ups, drunken weekend quizzes, yoga classes, and even dating.

But Zoom was also blindsided by the surge in demand it saw across the board, and in many ways it wasn’t ready for the tidal wave of signups and scenarios that it simply wasn’t designed for — its security and privacy weaknesses were thrust into the limelight as schools and other educational institutions flocked to the platform. For the most part though, Zoom acted swiftly to address many of these concerns.

Fast forward to today, and Zoom has given the first glimpse of an online world where it serves as the glue that connects people from all walks of life over video.

OnZoom, which Zoom touts as a “marketplace for immersive experiences,” is aimed at pretty much anyone who wants to host small events of up to 100 people, or larger events of up to 1,000 participants — depending on what Zoom Meeting license they have. To be clear, OnZoom isn’t intended for business events — it’s meant for portrait drawing workshops, Zoomba classes, and learning how to make Japanese comfort food.

Above: OnZoom: Discovery page on the web

Through OnZoom, anyone can schedule a one-time event (e.g. a book launch or concert) or a regular series (e.g. fitness or cooking classes) and sell tickets directly through Zoom, while promoting them through email or other social media channels. Classes can be filtered by date, category, and price, with many sessions available for free. 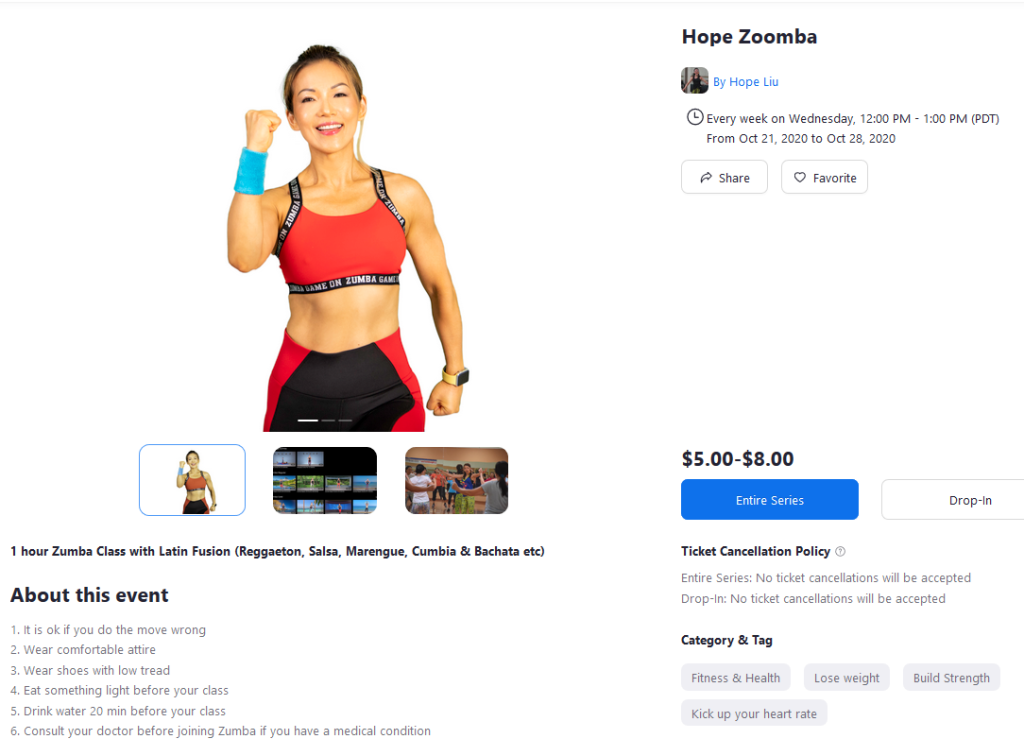 At launch, PayPal is the only official integrated payments partner, though Zoom confirmed that it will likely support other payment mechanisms in the future — and it’s also possible to pay with the usual credit and debit cards too. Moreover, OnZoom is also targeting charities, allowing nonprofit organizations to solicit donations through a partnership with Pledgeling, with 100% of proceeds going to the intended cause.

In terms of monetization, well, Zoom stands to make money from the Meeting licenses that event hosts pay for — this will depend on the number of participants that they’ll have at each event or class. And while Zoom won’t be taking a cut of event revenue at first during the public beta, it suggested that this could be an avenue it pursues in the future.

“Beyond this year, we’ll look into whether we should [take a cut], and if we will, what the percentage will be,” Wei Li, head of platform and AI at Zoom, told VentureBeat during a pre-Zoomtopia press briefing yesterday,

There are countless platforms out there already designed to bring events to the digital realm. Mountain View-based Run The World recently secured $10.8 million in funding from some big-name investors, while London-based Hopin raised $6.5 million to expand its online events platform. Elsewhere, Los Angeles-based Wave locked down $30 million in funding to help musicians stage concerts remotely.

However, with the brand recognition and mindshare that Zoom currently has, it is in a particularly strong position to capitalize on the trillion-dollar events industry. But more than that, all Zoom is really doing here making it easier for people to do what they were already using Zoom for during lockdown — it already has a captive audience in place, which is a hugely valuable asset.

“We’ve been very much inspired by all the amazing ways the world adapted to a shutdown of in-person events,” Li said. “When business owners, entrepreneurs and organizations of all sizes had to find some way to stay on course during COVID-19, and continue to provide services to their customers, many turned to Zoom. [But] they were forced to manage many different apps and have tools to market their events, schedule their events, engage with the customers and collect payment. And event attendees have to deal with even more apps and platforms. Our users asked us to address all these challenges, and we looked.”

It’s also worth looking at the bigger here. At Zoomtopia today, Zoom also unveiled Zapps, a new way for third-party companies such as Dropbox, Slack, and Atlassian to integrate their apps’ functionality directly into the Zoom video interface. Ross Mayfield, product lead for integrations at Zoom, said that he envisages that “Zapps” will lead to a whole new type of company: the “Zoom startup.”

Although Zapps is ultimately a different product and proposition to that of OnZoom, they share a very common goal: to serve as the building blocks for third-party businesses to make money. This is similar to what other social platforms, from Facebook to Snapchat, have been doing for years, through allowing anyone to monetize services built on top of their platform. Now Zoom wants a piece of the pie.