Founded in 2015, Second Measure has developed a self-serve analytics platform that supports real-time and daily metric tracking, using data from “billions of anonymized transactions,” including credit card payments. Its machine learning algorithms can scan purchase records to generate insights that can be compared by geography or time frame, for example, and used for predictive analytics. Second Measure has amassed a number of notable clients through the years, including Instacart, Postmates, Domino’s, Spotify, and Goldman Sachs.

Built-in behavior-tracking tools enable businesses to drill down and view such data points as similar stores consumers shop at or which brands they turn to after ditching a rival, while coffee chains could use Second Measure to carry out a market analysis of coffee drinking in local areas after opening new stores. 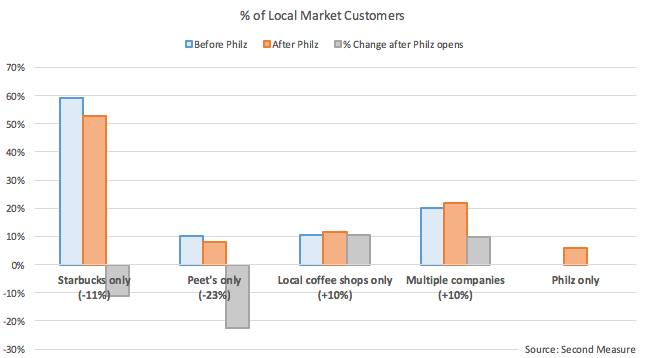 Aside from its news publishing property, Bloomberg is perhaps best known for its financial data and analytics services, which are accessed by thousands of businesses through Bloomberg Terminal. Investors are a major target audience for Second Measure, as it delivers insights into specific businesses or sectors they may wish to invest in. This “alternative data” appears to be what attracted Bloomberg to Second Measure, as Bloomberg has found investment firms are pursuing “more data-driven investment strategies.” At its core, Second Measure helps investors make sense of the deluge of data they’re faced with.

Terms of the Bloomberg deal were not disclosed, but Second Measure had previously raised around $25 million, the bulk of which arrived via its series A round in early 2019, so this acquisition was not likely to break the bank.

*This article was updated to clarify that Philz Coffee is not a Second Measure client.