The RetroBeat: River City Girls is a beat-’em-up delight

I enjoyed my holiday break because it gave me time to play a lot more games than normal. And after spending about 20 hours...

I enjoyed my holiday break because it gave me time to play a lot more games than normal. And after spending about 20 hours diving into Dragon Quest VII, a JRPG notorious for its slow pace, I needed something that’s a bit more exciting.

So I jumped on my Xbox Series X and started browsing through its Game Pass titles. That’s when I saw River City Girls. This beat-’em-up debuted in 2019. It’s a spiritual successor to the NES classic River City Ransom (in Japan, it’s a part of a giant series called Kunio-kun that includes other beat-’em-ups and sports games).

I don’t have much nostalgia for River City Ransom. It’s not a game that I played much in my youth … or since. But I was still curious about River City Girls. Thanks to the release of Streets of Rage 4 last year, I’ve developed a hankering for beat-’em-ups. Also, WayForward made River City Girls. That studio creates some of the prettiest 2D games ever made, like the Shantae series. 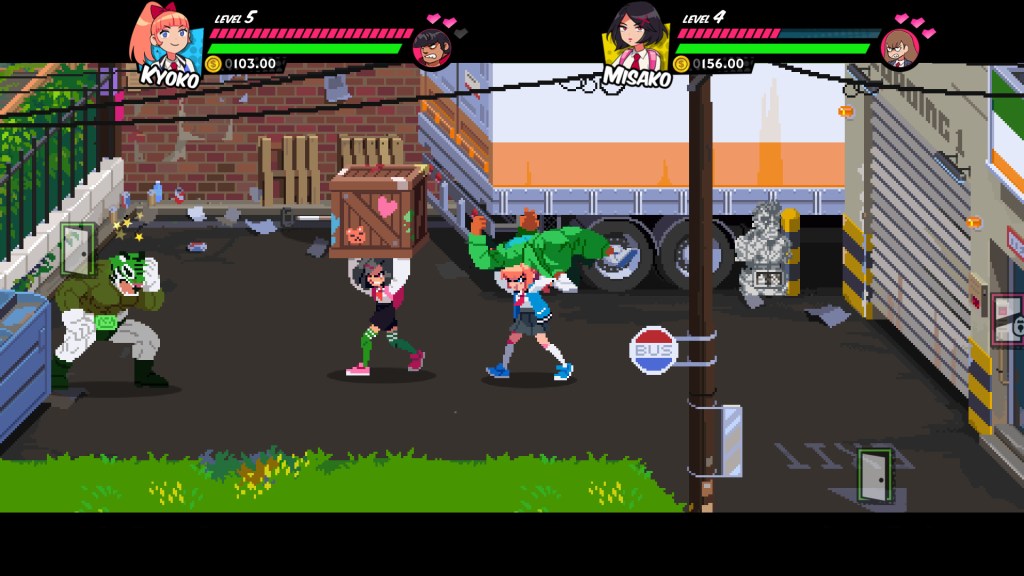 I then proceeded to beat River City Girls in a single sitting. Granted, this is no 100-hour RPG. But it’s rare for me to play through any game in one go, even a beat-’em-up that takes a few hours to complete. But I fell in love.

As expected, River City Girls is gorgeous. It has some of the best sprite art I’ve seen in any game. It’s also funny and charming. Your two main characters, Misako and Kyoko (I’m Team Kyoko all the way), are on a hunt to save their boyfriends from … something. They’re not really sure. The two girls engage in a lot of fun banter during the adventure, and the game manages to be fun and offbeat without becoming completely irreverent.

The combat itself feels great. You’re not just spamming punches and kicks. You discover ways to optimize your damage by chaining together moves into combos or by keeping enemies in the air with juggling attacks. Once you master a couple of combos and get that juggle timing down, fights become addicting.

The boss fights are another highlight. The best is against Noize, a rock star who sends out Guitar Hero-style notes that you have to dodge.

After beating River City Girls, I found out the next day that I could unlock an extra boss by breaking statues hidden around the game. So I played through it again and did just that. So far I’ve only played as Kyoko. I could happily go through the experience again controlling Misako (or one of the two special characters you unlock after beating that extra boss). I also haven’t even played it with a friend in some two-player co-op, something I’m itching to try.

I know I’m a little late here, singing the praises of a game that came out in 2019. Shame on me for not checking out River City Girls sooner. It’s a delightful beat-’em-up with fluid fighting, creative bosses, and gorgeous 2D sprites and art. And if you have Xbox Game Pass, you can try start playing it as easily as I did.

But even if you don’t have Game Pass or you’d rather play it on Switch or something, River City Girls is worth a purchase. WayForward has already said that it’s working on a follow-up, and that has now become one of my most anticipated games.