RP1 debuts a scalable platform for the ‘shardless’ metaverse

The metaverse won’t be very fun if you can only see 100 people at a time, like in a battle royale game. You should...

The metaverse won’t be very fun if you can only see 100 people at a time, like in a battle royale game. You should be able to join a virtual place with more than 100 million people, and that’s what RP1 is trying to enable.

The Newark, Delaware-based company is unveiling a platform today that provides the ability for worlds to scale up to millions of users in a single instance. CEO Sean Mann said in an interview with GamesBeat that RP1 is doing this to enable the metaverse, the universe of virtual worlds that are all interconnected, like in novels such as Snow Crash and Ready Player One.

RP1 sees the metaverse as a virtual space that interacts with the real world, where people can engage in economic, cultural, and social activities. RP1’s “infinitely scalable” platform can synchronously connect hundreds of millions of users to one another in a real-time, persistent virtual world, without the need for sharding, said Mann. By comparison, most virtual worlds today separate players into shards, or sections that limit how many players can fit in server-defined areas of a world.

Current network server technology can only host tens of thousands of users in a single shard, and is not capable of hosting an entire metaverse in one environment, Mann said. Mann believes the RP1 platform can be as much as 500 times more efficient than anything else. This means as many as 500 times fewer machines sitting in server farms taking up space, generating heat, and consuming electricity, he said.

“We have a major piece of the puzzle, which is groundbreaking,” Mann said in a panel, Blueprints for an Open Metaverse, today at our GamesBeat Summit: Into the Metaverse event. 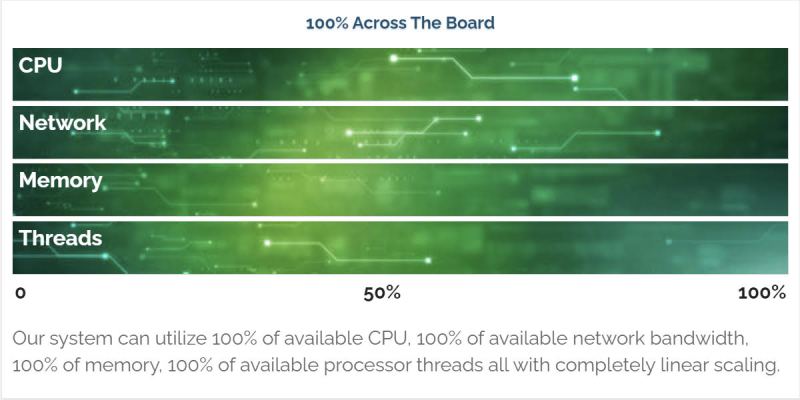 Above: RP1 wants to enable the most efficient metaverse servers.

The RP1 platform is a real-time, action/event-driven system that can support an extremely large number of concurrently connected users in a persistent simulation without sharding. Players send actions to the server, which are validated and aggregated for efficient distribution to connected clients based on their local view of the game state. It is currently optimized for turn-based games, but RP1 is in the process of adapting it for general gaming use, such as with a virtual reality headset.

The biggest strength of the system is its ability to linearly scale every resource in the system: CPU, threading, memory utilization, and network bandwidth. Because of this, a small cluster of 50 servers can handle two million users. RP1’s architecture is expected to yield a savings in the range of 200 times to 500 times fewer servers compared with existing architectures, said Dean Abramson, chief architect of RP1, in an interview with GamesBeat.

“Our vigorous efforts to maximize efficiency are crucial for several reasons. For one thing, extreme efficiency is simply a prerequisite for accomplishing the realization of a true metaverse,” Mann said. “Handling millions of users unsharded is not possible without radical new underlying technology orders of magnitude more efficient than anything that currently exists. What we’ve achieved is a system capable of handling more concurrent users unsharded than any existing system can handle at full capacity. By eliminating limitations of concurrency, we’ve made applications possible that sound more like science fiction than something coming in the next year.” 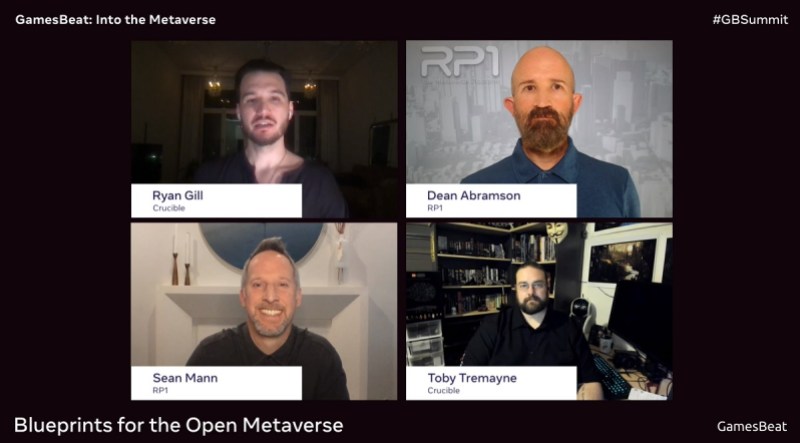 Above: The RP1 founders Sean Mann and Dean Abramson talk with Crucibles founders at GamesBeat Summit: Into the Metaverse.

RP1’s platform architecture allows for scaling central processing units (CPUs), threading, memory utilization, and bandwidth. RP1 will synchronously host 100 million concurrent users on less than 5,000 servers, said Abramson. He said he had to rethink the architecture of online connectivity from the ground up to get around the constraints that have held back attempts to achieve large-scale multiuser applications.

“Existing platforms require massive infrastructure to achieve large numbers of concurrent users,” Mann said. “Despite the impressive hardware that has been thrown at the problem, the best current systems still break their user bases up into shards in which only a small handful of users can directly interact. If what you’re attempting is a true Metaverse, that’s not going to cut it.”

Abramson said no one he has met thinks it’s possible to put 100 million people in a single metaverse. It’s like launching a mission to Mars. 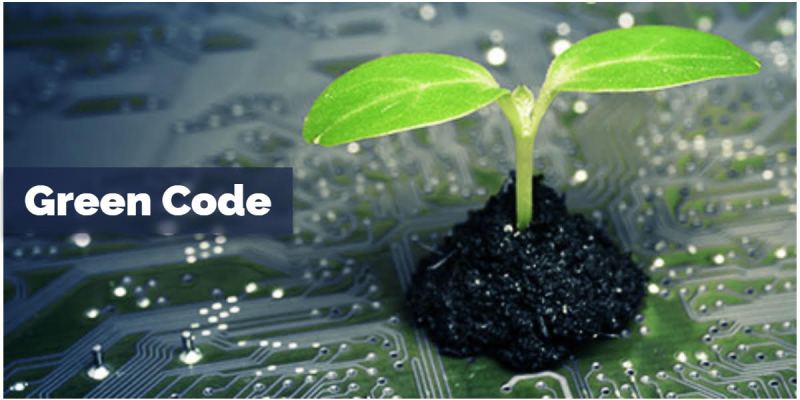 Above: RP1 started with a new architecture for concurrency.

Abramson said he has been thinking about this for the last decade. He was one of the people who had to design Full Tilt Poker in 2003. The challenge was to build a system that could handle 100,000 concurrent users. Poker didn’t have much to do with the metaverse, but it got Abramson thinking about how to get the largest number of users together in one world on the smallest number of computers.

“You needed a critical mass of people,” Abramson said. “And you can’t shard them up.”

By 2011, the U.S. government shut down online poker sites as illegal gambling. But Abramson kept working on the problem in the hopes of making the poker tech about 10 times more efficient. It was persistent but wasn’t as graphically rich as most video games. When he redesigned the architecture, Abramson was surprised at how well it worked.

“I missed the mark by a little bit and we ended up making it about 100 times more efficient,” he said. “We’re not gamers. But we seem to have mastered something that the game companies are missing to complete the metaverse. The trick is how do you get all the people together.”

Abramson believes he can reach about 100 million users with about 2,500 servers. That’s anywhere from three times to five times more efficient than anything else, he said. 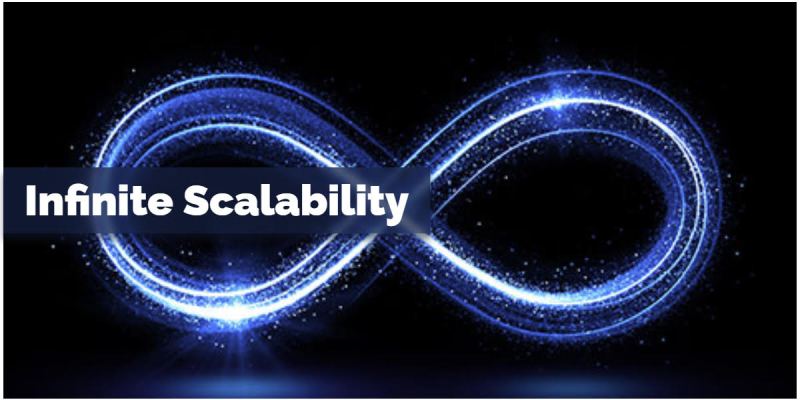 Above: RP1 believes it can scale the metaverse infinitely.

“We need to break those barriers if we’re going to create the metaverse,” Abramson said.

I like that because I don’t want the metaverse to melt the polar icecaps. Rivals include Improbable, which has raised hundreds of millions of dollars. But Improbable has hit some speed bumps along the way.

The company plans to complete its two million user demo on 33 servers by the end of the second quarter. Mann and Abramson are speaking on a panel today at 10 a.m. Pacific time. One of the reasons for that is that they see RP1’s technology as a foundation that a lot of companies should use, and that means no single company should keep the tech for itself, just to build one version of the metaverse.

“I want this to be open for the developers and people that want to really be part of this future, and not lock it into some huge corporations can take 30% and make it really difficult for people to grow within this environment,” Abramson said.

RP1 was created in 2020, and it has seven employees. The company is looking for funding.