How Jackbox Games adapted to a tumultuous 2020

When California’s first lockdown arrived in March, my friends and family relied on a few multiplayer games to stay in touch. One series we...

When California’s first lockdown arrived in March, my friends and family relied on a few multiplayer games to stay in touch. One series we kept going back to was The Jackbox Party Packs. And judging by its huge rise in popularity last year, we weren’t alone.

The Chicago-based Jackbox Games has been making these Party Packs — each entry contains a handful of silly competitive games — for PC and consoles since 2014. The latest, The Jackbox Party Pack 7, came out in October. Usually, you’d play with people in the same room as you. Everyone would watch the game on a TV or laptop while submitting answers or drawings on their smartphones.

But after COVID-19 made in-person gatherings all but impossible, Jackbox players had to get more creative. Fans began utilizing video chat software like Zoom and Discord to play remotely. Suddenly, the Party Packs and the dozens of games spread among them became more than just a way of teasing your friends or making inside jokes: They provided players a much-needed outlet for socialization.

“The core tenets [of our games] are always meant to bring out laughter and communication, get people talking and laughing and playing together. The fact that you can replicate that experience over a Zoom call, where you’re just sharing the screen during times when everybody’s in quarantine, is great,” said Jackbox Games CEO Mike Bilder.

“We love it. And I think that’s a testament to why so many more people are playing.”

Prior to 2020, the developers knew that a small percentage of people (including online streamers) liked to play remotely, and they added moderation tools and other features to support remote play over the years. But that number grew exponentially as more regions around the world enacted strict stay-at-home measures.

Jackbox’s party games weren’t originally designed with heavy online use in mind, so it had to work quickly to scale up its infrastructure and make sure the servers could handle all that demand. 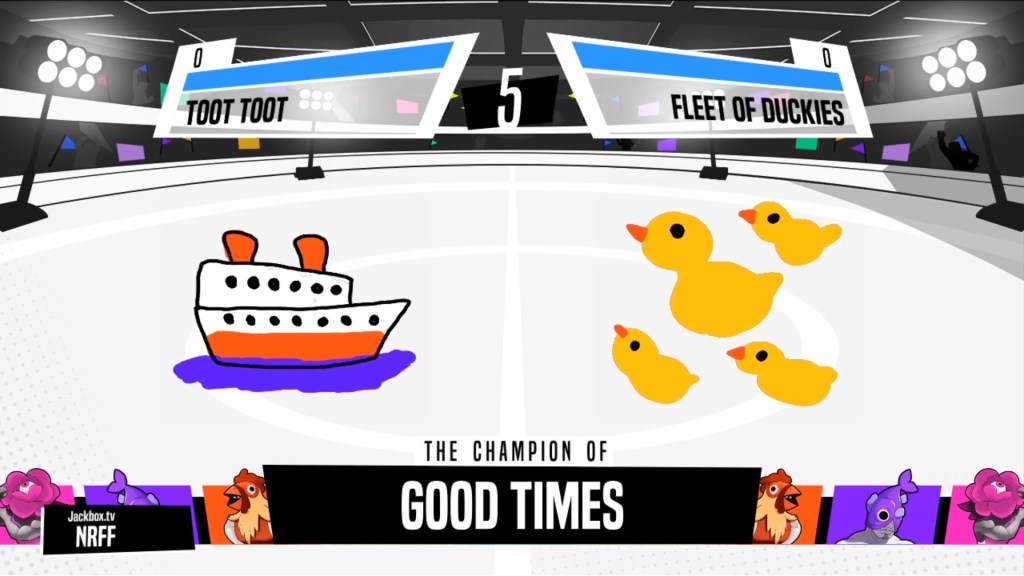 Above: The new drawing game, Champ’d Up, from Party Pack 7.

Jackbox’s employees were already working from home and were deep into development on Party Pack 7 when they first noticed a surge in activity in all their games.

“I would say it really took off in late March, early April. We suddenly saw just a huge spike in traffic, both on our servers for people playing and to our website for people to find out about our games and to purchase our games,” said Bilder.

Google saw a bump in search engine queries as well. According to data from Google Trends, searches for “Jackbox” in 2020 (and related ones like “How to play Jackbox on Zoom”) reached an all-time high in late March and early April, and then again in November and December. In the U.S., Jackbox made it to Google’s top 10 trending list in the gaming category, which included viral hits like Among Us and Fall Guys: Ultimate Knockout.

All this newfound attention took the developers by surprise. In the past, the servers were usually the busiest when people started gathering together for the winter holidays. But the kind of traffic Jackbox Games experienced in the spring obliterated those numbers, causing server outages as the team tried to catch up with the demand.

“What we started seeing in this timeframe was daily traffic that was like Thanksgiving and weekend traffic that was exceeding New Year’s Eve, which is typically our busiest day of the year,” said Bilder. “So we had a bit of a challenge on our hands to scale that fast, that quickly. … There were a few weeks where we were just trying to keep our heads above water and keep everything together.

“Once it all stabilized, everything’s been smooth-sailing, and we’re definitely stronger for it.”

Giving back to the community

When it became clear that the pandemic wasn’t going to end any time soon, the Jackbox team brainstormed ways to help people stuck in quarantine. They gave away Drawful 2 for free over multiple platforms. They wrote blog posts and made video tutorials to educate players about setting up virtual game nights with different types of video chatting software.

The developers also wanted to give back to communities affected by the pandemic. And they had the means to do so: March, April, and May were enormously successful for them.

“We were doing well and so many people were not: the economy, businesses, unemployment, all the health care workers and first responders. There were a ton of people that were affected during the shutdown,” said Bilder. “That’s how [the charity streams] came about. We wanted to make some donations. But rather than just make donations, we thought it would be fun to try and do some things to draw attention to a number of charities.”

The result was Celebrity Jackbox: Games and Giving, a nine-episode online streaming event that highlighted charities from around the world. Jackbox Games invited celebrities like Jack Black, Charlize Theron, and Jeff Goldblum to play with them and talk about the causes they were championing. The studio donated a total of $1 million over the course of the series. 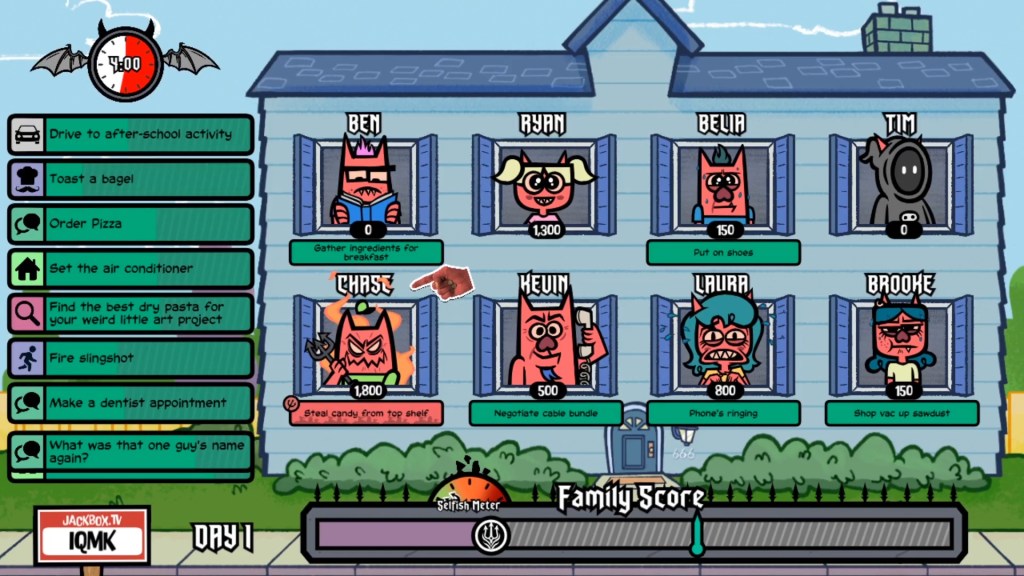 Above: The Devils and the Details tasks players with completing chaotic chores and errands.

While COVID-19 vaccines are currently rolling out in the U.S. and other parts of the world, it’ll take some time before the majority of the population is inoculated and people can safely play games in person again. So it’s likely that, for most of 2021, a lot of Jackbox players will still be playing remotely.

That’s something the developers are closely considering as they prepare the next edition of the game. The Party Packs have been following an annual release schedule since their inception.

“Because we were so far along in the production cycle of Party Pack 7, we didn’t have the [cap]ability to add specific features to enhance gameplay over video conferencing,” said Bilder. “But it’s definitely something we’re looking at for the future, like what might we do to make things easier to get a game running through Zoom.

“It’s fairly straightforward and simple, but for people who aren’t experienced with our games or with deep knowledge of how to run video conferencing, there’s still a little bit of hand-holding that we have to do. Those things are front of mind right now as we start building new games for for the future.”

One improvement that Jackbox has already made is putting all the information from its how-to blog posts into a dedicated webpage. The goal is to make it as easy as possible for anyone to set up a remote play session with their friends.

“I think everybody has had cabin fever and some downtime emotionally and socially while being cooped up in their homes. But watching people play our games and laugh and stream them and have fun and write emails to us about it — that kind of stuff really validates what we do and encourages us and motivates us to keep doing it,” said Bilder.

Bilder and his team are well aware how fortunate they are to thrive during such an awful time, and they hope the Jackbox games can continue to help people stay connected with each other, even after the pandemic ends.