Blizzard Entertainment said that Overwatch 2 isn’t coming in 2021, but it did reveal a bunch of new details at its BlizzCon Online event...

Blizzard Entertainment said that Overwatch 2 isn’t coming in 2021, but it did reveal a bunch of new details at its BlizzCon Online event today.

Jeff Kaplan, game director of Overwatch 2 — the shooter sequel to Overwatch — said in a presentation with leaders on the team that the game will have a wider range of environments for battles through the world. The team unveiled two new maps: Rome and New York.

Rome’s look emphasizes the blend of “romantic” old-world architecture with modern enhancements, such as The Colosseum alongside a new stadium. New York is set in a 1920s art deco style, with futuristic elements for landmarks like Grand Central Station. It will have details like pizza places and fire stations alongside the older buildings.

“We should move on or otherwise we’ll have to reveal more maps,” Kaplan joked.

Kaplan said that the characters will have changes compared to how they played before. The player-versus-player combat will borrow a lot from Overwatch, but there are experimental changes for various characters and roles. Heroes can have passive abilities depending on what role they are playing. Tank Heroes will knock-back reduction against them and generate less ult charge for enemies shooting at them. 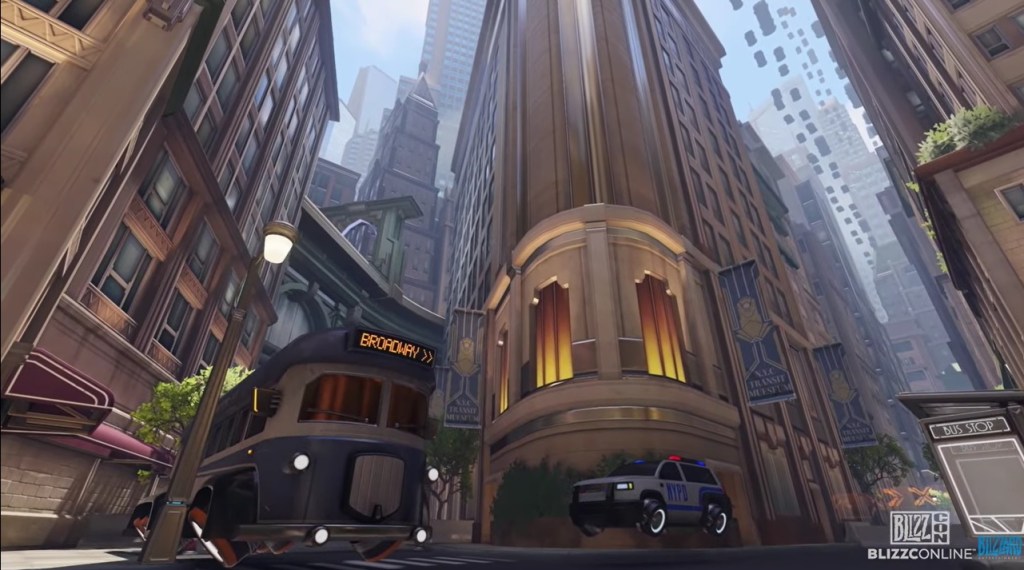 Above: New York map in Overwatch 2.

Tank heroes, for instance, won’t just stand back and provide shields to players, Kaplan said. They will have special moves that allow them to join fierce firefights and maneuver quickly around enemies as if on rails. The tanks will be able to engage in toe-to-toe brawls and be as aggressive as they look, he said.

“Some of these things you can only do with a new game,” Kaplan said, rather than an expansion to the existing game.

While all of the changes are still experimental, the current build of Reinhardt gives him two firestrike charges and charge cancellation. He can more accurately pin targets. Kaplan said these changes may not stick, but it will help players embrace the big burly aggression for the character. 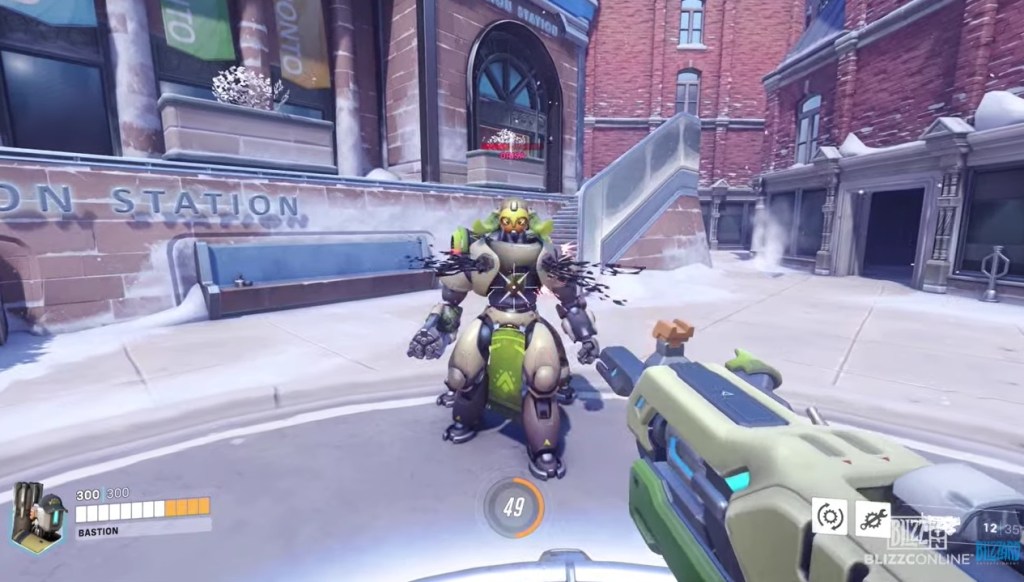 Above: Guns will sound different in Overwatch 2.

They showed off a new character, Sojourn, using a rail gun that will bring back the feeling of classic shooters (like Quake) where you can do enormous damage if you have accurate aim. It will rip through enemies. The blue-and-white character Pharah will have a gold visor that is transparent, so you’ll be able to read the emotions on her face more easily. Widowmaker is more like a cyberpunk, futuristic femme fatale with a long ponytail.

Blizzard is also remaking all of the sound of the weapons to make sure that they have a visceral feel. The idea is to make the sounds match the vibrations of heavy guns. The sounds will also be different based on where you are. If you’re in a place that echoes a lot, the guns will have “convolution reverb,” meaning the acoustics of echoes from the environment will be blended in with the gun sounds. You’ll hear those sounds in warehouses, tight tunnels, and small rooms. 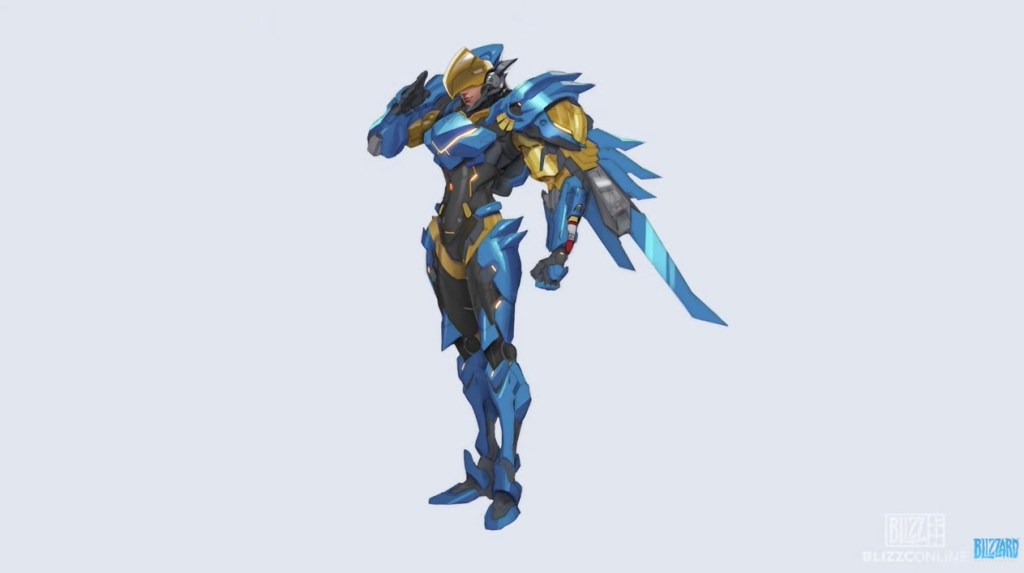 Above: Pharah has a see-through visor in Overwatch 2.

Quick melee attacks will have different sounds as well — a sign that everything is being addressed in the game’s sounds.

Soldier 76’s weapon will feel like a “gun is almost out of your control,” as it shakes while you’re shooting it. It will feel “incredibly powerful,” the team said.

“We are still exploring new game modes and reevaluating old game modes people are more critical of,” Kaplan said. “We want Overwatch 2 to feel like the next evolution, a true sequel to the first game, not an add-on. It’s not an extension of the original game. I think it’s exciting.”

There will also be hundreds of Hero missions in the co-op player-versus-player experience, where you follow a story and take on non-player enemies as you level up your hero. Julia Humphreys, production director, said that on some of the missions, the co-op players will have to split up to grab canisters and deal single-handedly with some very difficult enemies that spawn in their way. Objectives will change the mission almost entirely. They have names such as Kill Quest, Wall of Death, or Scavenger Hunt. Players play these missions and level up their heroes. 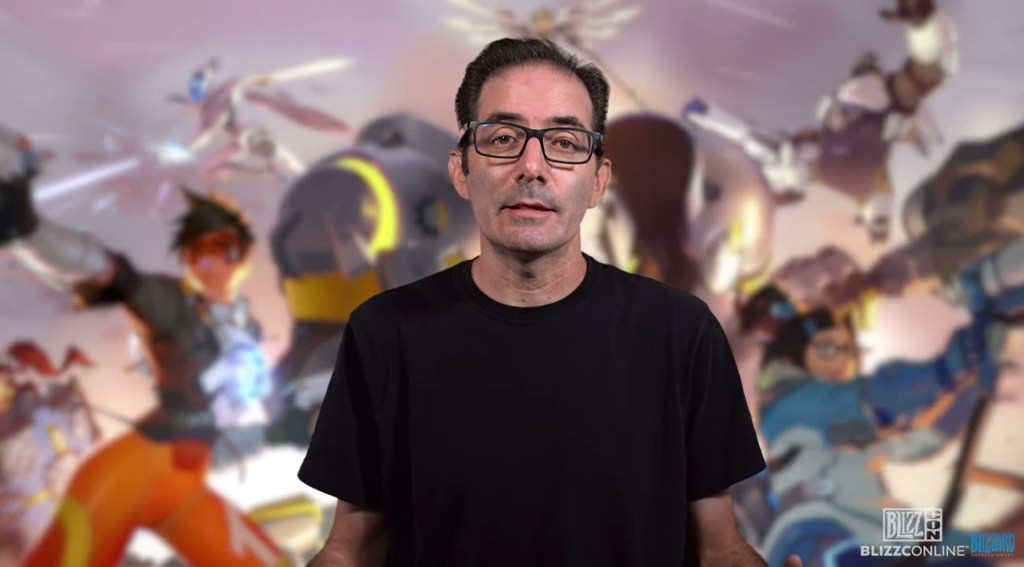 Above: Jeff Kaplan is game director for Overwatch 2.

As for environments, you’ll see things like sunsets, daytime, and nighttime versions of the same maps. And Blizzard has created dynamic weather, so a sandstorm or thunderstorm could show up in the middle of a battle, changing your visibility dramatically.

You’ll also see a role-playing game (RPG) style leveling up for things like guns. You’ll add talents to heroes and guns so that they can do electrical damage or freeze enemies, and that will let you control the battlefield in novel ways, Humphreys said.

Kaplan said that back in 2019, at the last BlizzCon where Overwatch 2 was introduced, the team felt that the combat wasn’t as engaging as it could be. The enemy units weren’t that interesting, and so the team went to work on enemies like Breached, which is a robot with two legs. It carries a huge bom on its back and it marches to an objective and the bomb unfurls like a flower. Players have to take it out before it blows up. Slicers are like really fast chickens coming at you. The Puller is like a witch in an evening gown, with three orb eyes floating around her head. 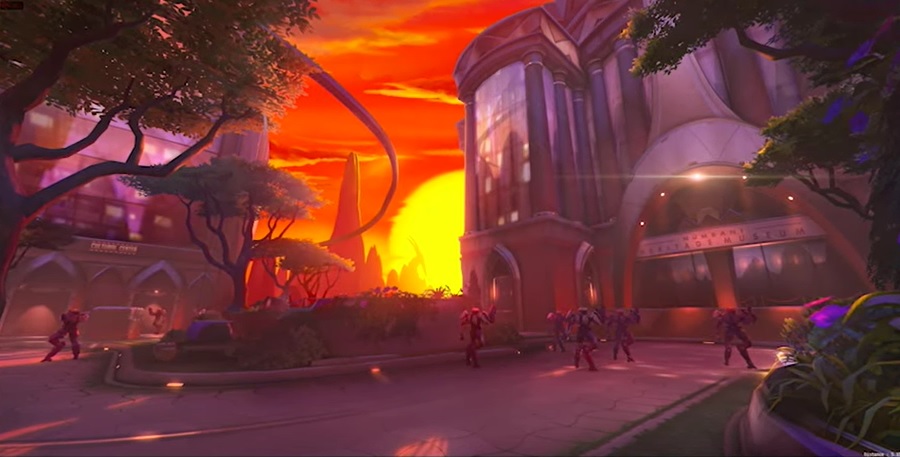 Above: Changing environments in Overwatch 2.

Overwatch 2 is the largest opportunity to really expand what Overwatch even means to our players,” Kaplan said.

The story will take place in a second huge Omnic (self-aware robots) uprising. You’ll see who is behind it and why it is happening. The Overwatch group has been disbanded, the world is in trouble again, and it needs heroes but they are not allowed to help.

During the gameplay, story moments will unfold within the environment. Heroes will have dialogue moments in those missions.

“We need some more time to say it is perfectly polished the way we want it,” Kaplan said. “What I’m most excited about is the moment when we hand the game over to the players. That is why we do it. We create the game because we want to become part of your life.”