The RetroBeat: Dragon Quest VII is too much

Dragon Quest VII has a reputation for being long. The original PlayStation version supposedly took around 100 hours to finish. Thankfully, I played the 3DS remake, which includes some quality-of-life improvements and trims the game’s length a bit. Yet compared to the breezy adventures of Dragon Quest V or Dragon Quest III, I knew that this was going to be a commitment.

Here’s the thing about Dragon Quest VII’s reputation: It is well-deserved. This game is long. Worse, it feels even longer than it is.

Before I start trashing it, I do want to say that it’s not like I was miserable the whole time I played Dragon Quest VII. The fundamentals that have made the rest of the series fun are still here. The turn-based combat is simple but engaging, and the art is vibrant and appealing.

And like with Dragon Quest III, Dragon Quest VII has a job system. Any character can learn any vocation, like mage, priest, or dancer. You can even unlock some advanced jobs if you’ve maxed out the right vocations. If your character has already learned mage and priest, they can become the sage, a strong spellcaster.

I love job systems. It makes grinding for experience and loot more enjoyable, as your characters progression feels more rewarding when you’re advancing jobs and learning new skills on top of just increasing your stats.

Unfortunately, you don’t even access this job system until 20 hours into the game.

Town of the day

Dragon Quest VII has a slow start. You spend much of the early game running between two towns and some ruins without getting into a single fight. Soon, you have your objective. You collect broken tablet pieces that you put back together so you can teleport to a new island.

And thus you’re exposed to Dragon Quest VII’s formula. Collect tablets, enter a new island, walk to its nearest town, find out its problem, solve the problem by going to a dungeon somewhere and beating a boss, and repeat. You do this for the vast majority of the game’s 80 or so hours.

It gets tedious. Since each island has its own self-contained problem and cast of characters, you don’t get much of a chance to become attached to any of them. You’ll start to revisit areas a bit more toward the end of the game, but by then you’ll have been playing for so long that you’ll be anxious to get to the end. 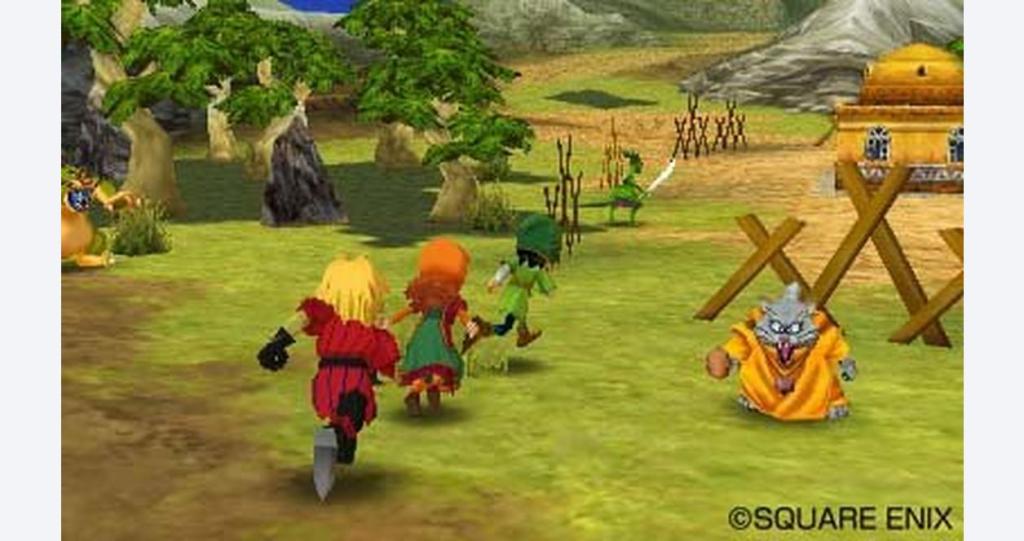 Above: Dragon Quest VII’s heroes on their (very long) adventure.

There is something impressive about the scale of Dragon Quest VII’s world, but the storytelling doesn’t match that ambition. It’s full of generic RPG questing that suits a smaller game like Dragon Quest III well, but it become repetitive when stretched out like this.

Dragon Quest VII also hesitates to make its main characters interesting. Of course the hero is a silent protagonist, but your party members don’t chatter much themselves. During most story events, everyone stays quiet while nonplayer characters talk among themselves in your presence.

Party members also have an annoying habit of leaving at random times. Hell, the first major party member you get permanently leaves the game after like 15 hours. This is a baffling and random decision. If you spent time leveling this guy up or wasted any stat-boosting items on him, well, tough luck. Later, another character left my party right after I spent hours grinding her jobs so she could become a druid. She wouldn’t rejoin my party again until close to the end of the game.

Dragon Quest VII has a nice job system, and it still has that classic JRPG experience that you want from a Dragon Quest game. But it’s just so tedious. It’s not the longest JRPG I’ve ever played. Heck, I spent almost as much time with Dragon Quest XI, and games like Persona 4 Golden took me 100 hours to beat.

But Dragon Quest VII felt like the longest game I had ever played. It’s too big for its own good, and that’s coming from someone who played the “abridged” 3DS version.

If nothing else, I guess its absurd length makes me feel like I somehow accomplished something by beating it. If finishing Dragon Quest VII doesn’t make me a real fan of this series, I don’t know what will.