Join Transform 2021 for the most important themes in enterprise AI & Data. Learn more. Roblox is making a big splash out of its...

Roblox is making a big splash out of its eight annual Bloxy Awards with a halftime musical performance by the British rock duo Royal Blood. It’s the latest example of how its metaverse for user-generated content extends beyond games.

Roblox wants to build the metaverse, the universe of virtual worlds that are all interconnected, like in novels such as Snow Crash and Ready Player One. But the metaverse is supposed to be about more than just games, and that’s why you’re seeing album launches and other music shows on Roblox. The promise of this metaverse is why Roblox was able to go public at a $41.9 billion valuation a couple of weeks ago.

The Bloxy Awards are a big deal as Roblox’s top games are played billions of times. will take place inside Roblox, and guests can attend as their own avatars in a celebration of the passion, talent, and creativity of the Roblox community of creators and players. It will happen on March 27 at noon Pacific time on the Roblox Platform. The concert, produced in collaboration with Warner Records, will mark the first live performance of Royal Blood’s new single, Limbo. Last year, a peak of more than 600,000 concurrent viewers watched the Bloxys. 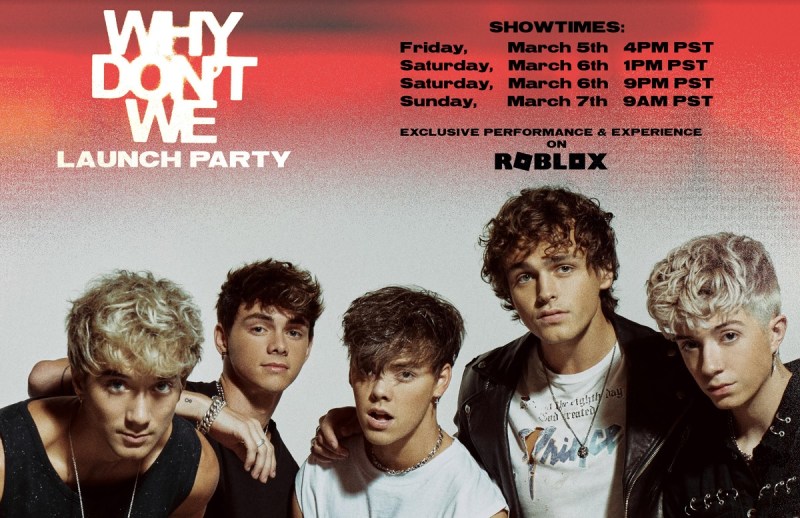 Above: Why Don’t Wee held a launch party for an album in Roblox.

The Bloxy Awards experience is open to all and takes attendees through four distinct environments on a voyage across the Roblox metaverse. Each experience will spotlight multiple category winners, and midway through feature an exclusive virtual performance from Royal
Blood — whose members include Mike Kerr and Ben Thatcher — in a space-themed concert venue.

“We’re trying to get out there with the music industry and explore different ways to leverage Roblox because we want this diverse experience for our for our user base around music,” said Jon Vlassopulos, vice president and global head of music for Roblox, in an interview with GamesBeat.

Royal Blood is a way to introduce rock music to Roblox’s audience, which started out as a platform for kids but is aging up as the players get older. Roughly 32 million people come to Roblox every day. Roblox has as many as eight million developers who have created their own works of art inside the world, and some of those players have gotten rich via virtual item sales inside Roblox. Three developers have made more than $10 million on the platform.

“This is the first-ever rock band to do anything in the virtual metaverse space, certainly on Roblox,” said Vlassopulos. “We hope we can start inspiring the community to not only listen and engage around music, and maybe to pick up a guitar and to play music.”

Rival Epic Games, which also wants to create a metaverse, announced yesterday that it will hold a virtual concert featuring Grammy-nominated DJ, Kaskade in Fortnite and Houseparty on March 26 and March 27. That will give Roblox some competition.

The Bloxys will take place in a kind of futuristic arena. And players will be seamlessly transported from the awards room to the performance location via in-world shuttles. The group will play three songs and then players will return to the awards event. I saw a demo of the space and it looks pretty cool, with Roblox’s signature purple and blue colors.

After the show premieres on March 27, the Bloxy Awards will replay every hour between March 27 and April 6 inside the Bloxy experience on Roblox. A full version of the show will also be recorded and uploaded to YouTube 10 days after the first show airs.

The range of immersive Roblox music experiences, from launch parties to virtual concerts, gives artists and labels a way to engage fans with exclusive performances and virtual merchandise, as well as games, quizzes, chats, and Q&As.

The performers will appear as Roblox avatars in what Vlassopulos calls “low-cap” art, with polygonal shapes.

“This gives us all these different ways to work with artists to test the creativity of the platform,” said Vlassopulos.