Join Transform 2021 this July 12-16. Register for the AI event of the year. Nvidia announced that a new wave of gaming laptops starting...

Nvidia announced that a new wave of gaming laptops starting at $800 will use its new Nvidia GeForce RTX 3050 and 3050Ti graphics processing units (GPUs).

The new RTX laptops are thin and deliver graphis that are twice as fast as previous-generation systems, with 60 frames per second gameplay at 1080p resolutions in popular titles such as Minecraft RTX and Call of Duty: Black Ops Cold War.

“We have more GeForce laptops than ever, with over 140 designs from every major (original equipment manufacturer) OEM,” said Vivek Gowri, senior product manager of GeForce laptops, in a press briefing. “These are the thinnest and most powerful laptops ever. RTX is coming down to $799 with the RTX 3050 Ti and RTX 3050 laptop GPUs, bringing the capabilities of RTX to the mainstream.” 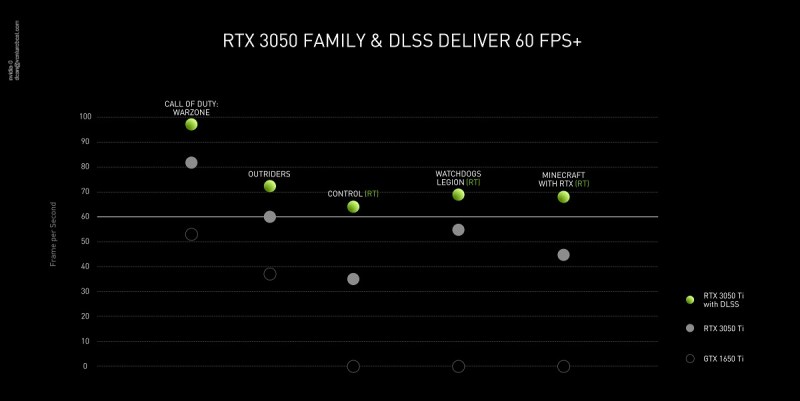 Above: Nvidia’s RTX 3050 family will boost laptop games to above 60FPS.

Laptop owners, who typically upgrade after about four years of use, can see big performance gains with the newest GeForce RTX 3050-class laptop GPUs. With Nvidia DLSS, GeForce RTX 3050 Ti laptops are also up to two times faster than previous generation systems.

Additionally, creators can experience DLSS acceleration in applications such as D5 Render, SheenCity Mars, and Nvidia Omniverse, which enable artists to visualize their designs in real-time instead of waiting for ray-traced scenes to finish rendering.

“We released the Nvidia Omniverse recently into open beta as an RTX-accelerated platform for 3D content creation and collaboration,” Gowri said. “It allows artists to easily sync assets from over 20 creative apps such as Maya and Unreal Engine.”

For those who enjoy competitive games, new GeForce RTX 3050 Ti laptops can deliver more than 144 frames per second and sub-25-millisecond system latency in titles such as Overwatch, Rainbow Six Siege and Valorant, thanks to the Nvidia Reflex Low Latency mode. Seven out of the top 10 competitive shooter games have Nvidia Reflex support. Nvidia Reflex is also supported across the entire RTX 30 Series lineup.

All RTX 30 Series laptops include support for Nvidia Broadcast, an app that transforms laptops into a home studio. This has now been improved with new AI-effects — room echo removal and video noise removal — and updated the audio noise removal to eliminate sounds from cats, dogs and insects. These effects, together with the previously released virtual background and auto frame, can now be stacked to provide more control and quality over audio and video.

RTX-based Studio laptops are designed for creators to meet their demands for performance and reliability. Newly unveiled Nvidia Studio laptops equipped with RTX 30 Series GPUs now render creative and professional apps up to two times faster than the previous generation. Video editors can work with 8K RAW footage, use AI to simplify workflows and reduce encode times by up to 75%. Artists can take advantage of up to 16GB of graphics memory to work with huge assets or multiple apps simultaneously for increased productivity and efficiency.

Nvidia is pitching the laptops as ideal for STEM (science, technology, engineering, and math) students, as 75 million STEM students around the world will return to classrooms in the fall with the need for powerful computing machines.

Acer announced Predator Triton 300, Predator Helios 300 and Nitro 5 notebooks with new 11th Gen Intel CoreTM H-series processors and Nvidia GeForce RTX 30 Series laptop GPUs, including the new GeForce RTX 3050 and GeForce RTX 3050 Ti chips. Gowri didn’t say whether the ongoing chip shortage would affect system availability, but he said the ramp for the GPUs as a whole has been faster than for previous families.