Did you miss GamesBeat Summit 2021? Watch on-demand here!  Made in Italy is taking on new meaning when it comes to games. Italy’s game...

Made in Italy is taking on new meaning when it comes to games. Italy’s game industry grew 45% from 2018 to 2021 to more than 1,600 developers and 160 game studios, according to a survey by Italy’s game association.

The survey from the Italian Interactive Digital Entertainment Association (IIDEA) and research firm IDG Consulting was the fifth census of Italian game developers and it showed how much the Italian game industry has prospered, even during the pandemic. The results show the industry is becoming more mature with 73% of developers now operating for more than four years, said Thalita Malago, CEO of IIDEA, in an interview with GamesBeat.

“We have a number of consolidated companies that have been in the market for four years that recently were either acquired by international groups or were able to set up important partnerships with international companies,” Malago said. “We have a group of startups with young developers who are doing very creative and innovative production. These are the two main factories why we are seeing the sector growing.”

In the last two years, 35% of companies have hired new staff, and 59% said they plan to do so in the next two years. The sector can generate professional opportunities especially for the younger generation (79% of employees are under 36 years old) and in different areas with great added value in terms of specialized skills, such as technology, art, and design, as well as management and support. 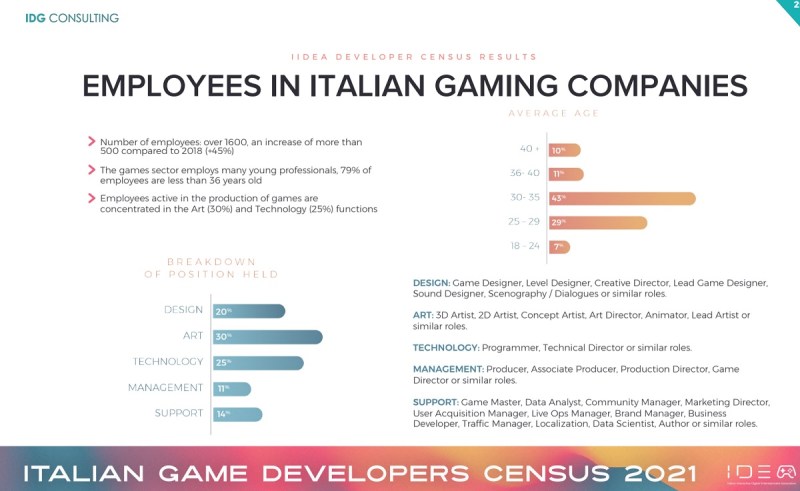 The domestic Italian industry makes games for the international market, which accounts for 94% of revenue. Europe is the main target market with 60% of revenues, followed by North America at 25%. And firms are seeking to expand sales in Asia. The financial support comes from game publishers and public and bank financing. About 93% of developers use equity to finance their activities, and publishers now fund 28% of the companies, compared to 21% in 2018. Public funding accounts for 24%, compared to 6% in 2018, and banks account for 18% versus 6% in 2018. That shows growing confidence in the Italian studios.

Overall, Italy has 62.3 million people across 26.2 million households. It has 16.7 million gamers, or 38% of the population, making it one of the top 10 game markets in the world. That’s a key ingredient for fueling the ranks of game developers. Overall, 1.5 million Italians work in creative industries. About 62% of teenagers between 11 and 14 play games on their mobile phones. And 67% of Italian gamers who play more than four hours a week follow a streamer on YouTube or Twitch. 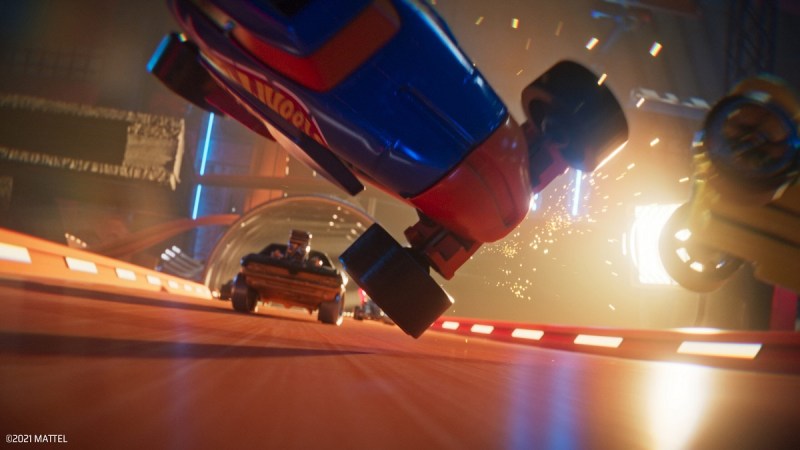 Luisa Bixio, vice chair of IIDEA and CEO of racing game studio Milestone Studios, said in an interview with GamesBeat that the roots of companies like Ferrari have inspired Italian game developers to focus on racing games. Ferrari has also sponsored an esports tournament for racing games that will lead to finalists racing cars around a physical track.

The Italian companies partnering with global companies include Milestone, Ubisoft Milan, Storm in a Teacup, 34BigThings, and Xplored. Many of the studios are shifting to focus on double-A and triple-A console and PC games.

“Video games is a young industry in Italy, but there are groups of developers that are spinning off bigger companies,” said Bixio. “Several companies are doing racing games. Digital growth is definitely helping.”

Horror games have done well, including Storm in a Teacup, The Suicide of Rachel Foster, Close to the Sun, and Remothered: Tormented Fathers. Broken Arms Games in the United Kingdom recently created Hundred Days, which was about how to manage a winery in Italy. Ubisoft Milan helped create Mario + Rabbids: Kingdom Battle, a celebrated title on the Nintendo Switch where Nintendo and France’s Ubisoft collaborated. I wrote about one called Last Day of June from Massimo Guarino, creative director at Ovosonico.

“We have a great variety of genres in Italian production companies, with some special expertise in racing games and horror games,” Malago said. 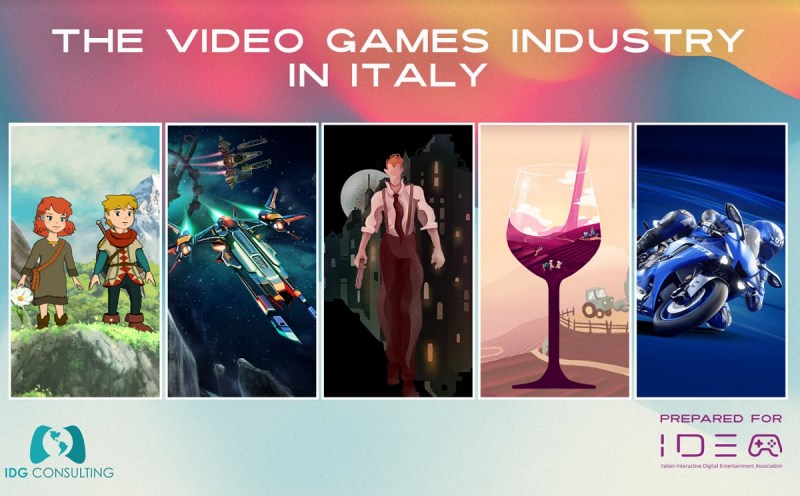 Above: Made in Italy.

As a negative effect of the pandemic, companies mainly reported delays in closing contracts with publishers, investors, and partners and in project execution. For most companies, remote working had no effect or a positive effect on business, and nearly 70% of them will continue to use this mode of working in the future. Like the rest of the game industry worldwide, the Italian developers have show an ability to adapt to the restrictions imposed by the health emergency and a high level of flexibility in the workforce, said Bixio.

About 53% reported COVID-19 did not affect their operations, although 36% reported delays in producing their games. And 87% of respondents said they were optimistic about the future of the industry and their businesses.

The smallest studios were used to work from home or without an office,” said Malago. “We were a little bit affected in efficiency, but we learned something new. We learned how to be more efficient.”

The government has offered tax breaks on digital spending. The IIDEA game group is working with two government ministries: the Ministry of Culture and the Ministry of Economic Development. The minister of culture has announced a tax break that will cover 25% of production costs for companies with video game employees. This plan has been submitted to the European Commission for approval, per European Union law. And at the beginning of the year, the Ministry of Economic Development signed a decree introducing a game prototype fund, which developers can access to get 50% of their prototype creation costs covered. 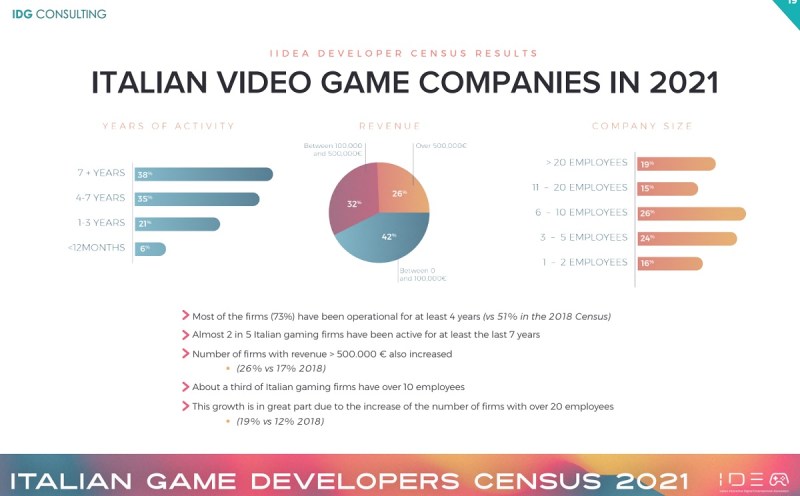 Above: A look at Italy’s game companies.

“This puts our developers in a better position to compete with other developers from other countries in pitching their projects to publishers and investors,” said Malago.

The industry is served by a couple of big events, including Milan Games Week, which takes place in the fall and drew more than 150,000 fans in pre-pandemic times. There is also the Italian Video Game Awards in Pisa. The latter has a business-to-business event where developers can meet publishers and potential investors. Last year, the event had more than 50 companies in attendance. It also has an International Game Developers Association chapter in Turin.

Right now, local investors have not been looking at investing in local Italian game companies, which is something that the census revealed.

“The role of investors is still quite limited, and this may be mainly because there isn’t deep knowledge of the sector with local investors,” said Malago.

Hopefully, that will change, as there are more than 80 different game-focused investment funds throughout the world. 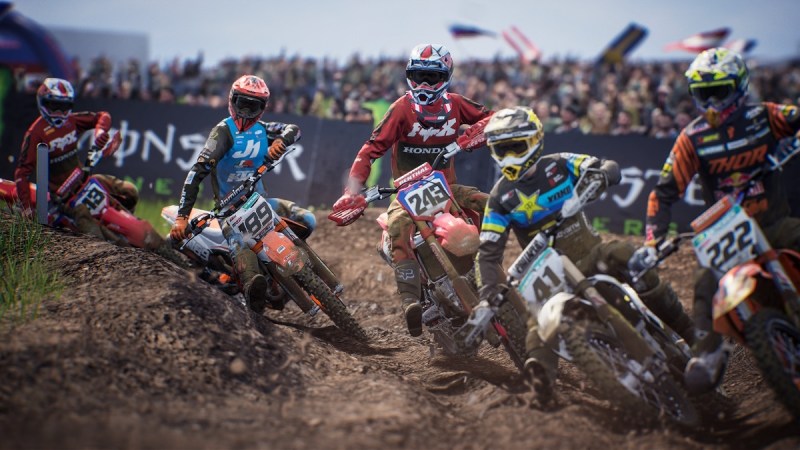 Above: MXGP 20 is one of Milestone’s racing games.

This year’s edition includes not only a quantitative survey, but also a qualitative analysis of the Italian industry, thanks to a partnership with IDG Consulting, a research and consulting company known internationally, with the aim of providing a complete picture of the potential offered by made-in-Italy video games, especially with a view to attracting foreign investment in our country.

The quantitative survey is based on an online questionnaire, active from February 24 to April 1, 2021, open to Italian companies and freelancers operating in the video game development sector in Italy. A total of 160 valid responses were recorded, a 26% increase over the number of responses recorded in 2018. And 73% of respondents were collective enterprises, 18% were freelancers, and 9% were other organizational forms. IIDEA itself is ten years old.