Magic: The Gathering’s Adventures in the Forgotten Realms delves into Dungeons

Where does your enterprise stand on the AI adoption curve? Take our AI survey to find out. I once feared Magic: The Gathering would...

I once feared Magic: The Gathering would kill Dungeons & Dragons. Wizards of the Coast ended up saving it, and now, the granddaddy of trading card games is heading to the Forgotten Realms of Faerûn — and its Dungeons.

Today, Wizards of the Coast is showing off more cards from the Adventures in the Forgotten Realms set, which launches July 8 on Magic: The Gathering — Arena and July 23 in paper. In addition to bringing the likes of Drizzt Do’Urden, Tiamat, and Lolth the Spider Queen to Magic, Adventures in the Forgotten Realms introduces Dungeons to the card game.

Senior game designer James Wyatt (who also worked on two of my favorite D&D books, the 3rd Edition City of the Spider Queen and Draconomicon) and worldbuilding designer Meris Mullaley showed off a handful of the set’s cards to the press last week. And the three Dungeons and their Venture mechanic showed how the Magic team is approaching fitting Realmslore into the set.

Above: The dungeons of Adventures in the Forgotten Realms.

The Dungeons are adaptations of existing D&D modules and campaigns that have appeared in 5th Edition (among others):

“Whenever you have a card that tells you to Venture into the Dungeon, what you do is you pick one of these Dungeons, and you put a marker at the very top room. And every time you Venture, then you can move down a level — farther into the Dungeon — by one room,” Wyatt said in a video briefing.

Each player has their own Dungeons, so they could be exploring the Lost Mine of Phandelver at the same time (so, two people could be doing so in a 1-on-1 game, or three of four players could be in a Commander match). You can have one, two, or all three active at once. When you Venture, you could either go deeper into one or begin exploring another.

These Dungeons offer choices. You choose which one you want to delve into and which path you take. The Tomb of Annihilation has you sacrificing cards, artifacts, and life to gain a horrific benefit (which fits the theme of the lich Acererak’s deathtrap). I also find adding this dungeon interesting because Acererak was a card in Spellfire, which was D&D‘s failed answer to Magic back in the 1990s.

Halaster’s dungeon gives you more choices, but it takes longer to get through it (as befits the numerous levels of Undermountain).

“If you choose Dungeon of the Mad Mage, you’re really in this dungeon for a long time exploring the holes of Undermountain,” Wyatt said. “You need seven Ventures to get all the way through, but you have lots of choices to make as you go along the way.”

Dungeons are a neat way to capture the flavor of D&D within Magic. Undermountain has been a mainstay of the Realms since The Ruins of Undermountain boxed set in 1991; since then, TSR or Wizards of the Coast has published several campaign sets, adventures, game books, and even a board game about these halls.

The Magic team is using its existing combination of creatures, artifacts, and spells to take advantage of these Dungeons.

Above: These cards work with Dungeons, giving you benefits or helping you get through them.

“There are a variety of cards that interact with Venture in interesting ways, including all the way down to Common [rarity] with things like Shortcut Seeker, hitting that classic trope of ‘look, there’s a trapdoor under the rug,’” Wyatt said. “Venture is a strong theme across all rarities, so there’s lots of opportunity for players to experience the thrill of exploring Dungeons.”

I asked if the Dungeons had special loot attached to them, such as a Sphere of Annihilation for the Tomb of Annihilation. A Wizards spokesperson on the call said we’d have to wait and see on that.

Give me land, lots of land

Another way to capture the flavor of the Forgotten Realms is with lands. The Basic lands all have some art or text reference to Faerûn, even if it’s not obvious at first glance.

What’s really interesting are some of the alternate land cards. One example is Evolving Wilds, a Magic staple. This treatment captures the style of classic D&D modules such as The Keep on the Borderlands (it even has the lavender-ish coloring). 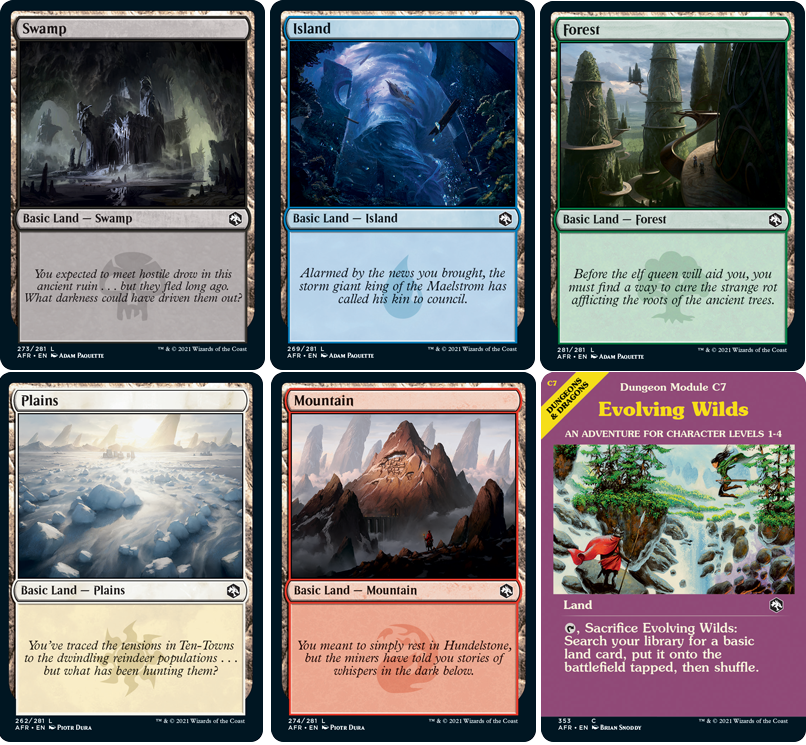 Above: The Basic lands reference the Realms in their art and their text.

The set will have nine of these lands, eight of them with new names.

“We’re calling this the Classic Module land frame. These are borderless module lands featuring art that is reminiscent of the cover art from classic Dungeons & Dragons adventure modules,” Mullaley said. “They’re all lands. There’s nine of them. This one is Evolving Wilds, but the other lands are new, with names that were created to sound like adventures.”

Seeing some of the Basic lands did raise a concern. The Forest doesn’t scream Forgotten Realms to me, and the text doesn’t add any flavor; it looks like it could fit into any other Magic set.

“We did a full concept push for this set, like we do for any Magic set. Obviously there’s already a ton of art exploring what the Forgotten Realms looks like. There’s not necessarily a ton of of art or color art establishing the look of specific geographical regions like the Evermoors, or the Spine of the World, or the High Forest,” Wyatt said. “So all of these lands — almost all of these lands — do actually point to specific places that we developed in the world guide, though I think that forest right there is an example of elven architecture, rather than a specific place, so that was also one of the areas we explored in the world guide.

“If I’m remembering right, the cycles of lands include one of each land type in the Underdark, one that shows a settlement of various peoples of the Realms, one that is just a wilderness area, and one that includes some ruins of ancient civilizations. So there’s definitely a lot of Realms flavor, sometimes not obvious in there, but in there.”

Who’s the set for?

Above: Card treatments for Adventures in the Forgotten Realms include borderless art cards, special art cards that look like D&D stat blocks, and illustrations that hark back to 1st and 2nd Edition styles.

As Mullaley and Wyatt showed off this batch of cards, I wondered (as did others on the briefing) who this set was for. Is it for Magic players, enticing them into something new? Is it for Realms fans who Wizards wants to push into Magic? Or folks like me, who enjoy both of Wizards’ big properties?

“I think that for someone who is familiar with Magic and not familiar with Dungeons & Dragons, it will be like encountering a completely new plane that we’ve created for the first time for a Magic set,” Mullaley said. “It’s for Standard play, so it’s built to work with all of the other sets in Standard. And while we created a few new mechanics that were kind of inspired by Dungeons & Dragons play for this set, for the most part, it plays like a Magic set, and it’s got the creature types you’ve come to expect and be the Standard exciting Magic gameplay, and the flavor of the world happens to be Dungeons & Dragons.

“So we’re hoping that, as you’re playing this, what might be a deep cut reference for a friend of yours might be something that sparks a bit of curiosity for you.”

One card that worries me is a Legendary character, the Dragonborn knight Nadaar, Selfless Paladin. They’re a character created for this set. But why would you need to make characters when you have official material going back to the “Grey Box” set of 1987 and Realms fans want characters they’ve come to love over the years, such as The Simbul, the dastardly wizard Manshoon, or even gods such as Bhaal?

“Hopefully, we can do both,” Wyatt said on mixing known and new characters together. “We have a lot of goals, putting Legends into a set, including hitting nostalgia, but also hitting various diversity milestones, trying to make sure that that we’re reflecting our audience and the game as it is now, not as it was 25 years ago. So, yeah, we definitely trying to do both.”

Yesterday, Magic head designer Mark Rosewater posted a blog with a number of hints and teases that addresses my concerns. These include:

Also yesterday, Wizards of the Coast put out a list of folks who will have card previews and the date they’re showing them off.