A new GamesBeat event is around the corner! Learn more about what comes next.  Humankind is my favorite type of game: a glorious mish-mash...

A new GamesBeat event is around the corner! Learn more about what comes next.

Humankind is my favorite type of game: a glorious mish-mash of mechanics from other standouts from its genre, all informed by a studio’s design and visual philosophy. This 4X game (explore, expand, exploit, exterminate) takes the main ideas from Civilization, and Amplitude Studios blends them with the city-building and clean, pretty UIs of its Endless series.

The conceit here is as you advance your civilization, you may choose a different culture at the dawn of a new era. Its spin on other 4X empire builders also includes a better early game, diplomacy mechanics, and city-building.

It does stumble in other areas. Culture choices feel like they box you in sometimes. Neutral empire behaviors and spawn rates feel uneven, as does the rate and number of luxury and strategic resources. And while its era stars system does provide some guidance on how to advance through the different epochs of human history, it does feel a bit restraining at times, too, on win conditions.

Humankind is out now on PC.

Humankind’s hook is mixing cultures. You may start out as the Babylonians in the Ancient era, and then choose the Phoenicians in the Classical era. It’s a cool idea, one I dig a great deal. It’s feels great, too, when you level up to the next era and find a culture that fits your previous one, while at the same time, giving you a new bonus that complements what you’ve been building toward (such as, say, a merchant empire).

Above: Istanbul sure as heck is Constantinople in my world!

It does have some flaws. If you’re lagging behind your competitors (either other players or AI-controlled rulers), they may pick all the choices that best work for your civilization. Amplitude does provide an option to “ascend” with your current culture. But if you had to change the direction of your civilization (say because of military pressure, forcing you to build more military units to stay alive), ascending may be of little help.

It’s cool when you “high roll” into cultures that are great fits, like starting with the Nubians, moving on to the Phoenicians, then adapting the Byzantines (and so on). This leads you on a clear path toward what you want to build, what civics and technologies you want to research, and how you want to interact with rival cultures.

The art of councillorship

I enjoy how diplomacy works in Humankind. I feel like Amplitude is giving me more to do here than in other 4X games.

Once you meet a culture, you can start talking and making deals. You can make an agreement to only trade luxury items, or you can put a “for sale” sign on all your resources. You need iron to level-up your troops? Buy it from the Goths! You can propose treaties to share information (which opens up more of the map), establish open borders and peace treaties, and so on.

To me, it feels more accessible than the diplomatic systems of other games — especially for those in which you’re dealing with “hidden agendas” that aren’t apparent at first.

Above: Events such as these can boost your starting tribes.

My favorite part of civ-builders is the early game, when you’re exploring the world for the first time and finding places to set up your city. And Humankind’s early game may be the most enjoyable yet.

When you start, you’re just a tribe of hunter-gathers with no home. And you don’t start with a settler-type unit. Humankind doesn’t have any of those. You need to acquire enough influence to establish your first outpost, which can evolve into your first city. How do you get this? By making discoveries, fighting beasts and maybe even other wanderings, and growing your tribe.

Some may look at this as more frustration, needing to acquire resources before settling a city. Yes, this can lead you to falling behind other civilizations if you get an unlucky starting point on the map. The others may pick the culture you want before you get a chance to choose it.

Yet I embrace these challenges. For me, the exploration phase of 4X has always been my favorite, and giving me another thing to do as I explore is something I welcome. 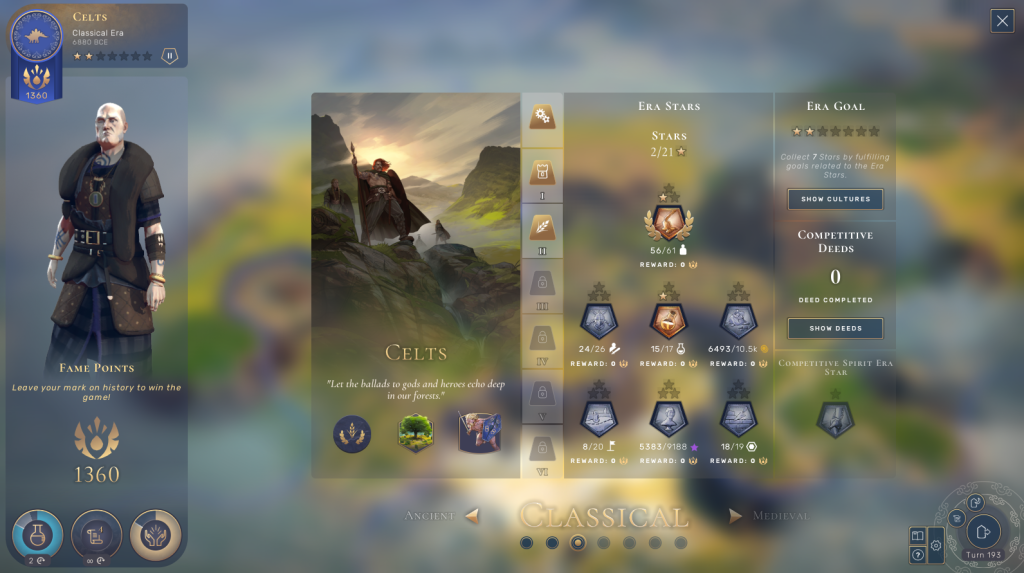 Above: Am I winning yet?

To progress from one era to another, you earn earn Fame, which goes toward era stars. These stars fill up categories such as Agrarian, Builder, Merchant, Militarist, Scientist, and so on. You get bonuses for earning stars that fit your culture. You also advance these by pulling off deeds and building world wonders.

Now, it’s nice that Humankind shows you just what you need to advance to the next era. But it feels more like scorekeeping than growing a civilization, constricting how I want to proceed through era to era. It would’ve been nice to have era advancement tied to something more concrete to the culture you’ve adapted. I realize this would require a great deal of design work to achieve, but it would’ve fit the idea Amplitude is playing around with in the first place: evolving cultures.

Is it an evolution?

Does Humankind change how the civilization-builder works? No. Does it tweak how it works? Heck, yes. But the tweak doesn’t come across more as a part of that gradual evolution that’s a part of game design, not something that will go on to define its genre.

Humankind also has a good sense of humor, as you’ll see in events that happen from one era to the next.

One of the most encouraging aspects of Humankind is its studio. Amplitude lovingly ushers its games from launch to DLC and expansions. It fixes issues, and it provides new content. I’m excited to see what this means for the future of Humankind, and I suspect I’ll be playing this more than Civilization and its ilk for some time.

At least until the next generation of Civilization comes out.

Humankind is now available for PC. The publisher provided GamesBeat a Steam code for the purposes of this review.